Teehee, giggle, snort. Perhaps I should be writing a different lesson today: ‘I have a juvenile sense of humour’.

Cameron and I are approaching our fifth wedding anniversary. For the first two years, we made a sterling effort to buy each other thoughtful, traditionally-themed presents for our anniversaries, and to do something special together.

First anniversary. Paper. Cameron and I stayed in a luxury hotel, dined at Mirka (run by Guy Grossi, having eaten at Grossi Florentino the night Cameron proposed), and bought each other gifts made of paper. Cameron won the unofficial present-buying competition by tracking down a signed first edition of my favourite book, April Fool’s Day by Bryce Courtenay.

Second anniversary. Cotton. We went on a Slumber Safari at Werribee Open Range Zoo. We stayed in ‘tents’ that were bigger than our house, dined on African food, danced at Rhythm of Africa, and got up close to lions, hippopotamuses, giraffes, rhinoceroses, snakes… the list goes on. And I evened the present-giving score by giving Cameron the best snap of the safari on canvas: 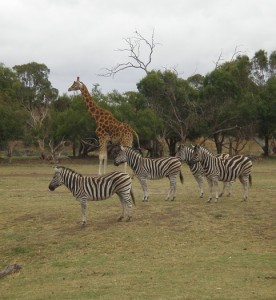 Third anniversary. Leather. Fatigue set in. I was pregnant and exhausted, we were waiting for our house plans to be finalised, and we were pinching our pennies. We said happy anniversary, kissed, and promised to buy ourselves a leather couch when the house was finished.

Fifth anniversary. Wood. Who knows? There’s plenty of wood coming up (teehee, giggle, snort); we’re about to get new floorboards put in. That just screams ‘Honey, you still rock my world and float my boat!’. And it also means I probably won’t even be with Cameron on our anniversary. Ashleigh and I are escaping the mess and noise with some grandparent visits. Romantic, aren’t we?

I love Cameron. He loves me. We will make time soon. When it comes down to it, that’s all that really matters.

How do you celebrate your anniversaries?