Hooray! I love Seuss! More Seuss! I was so exited when I saw Horton and the Kwuggerbug on the local bookshop shelves!

But I was also wary. Needlessly, it turns out.

Here are my thoughts.

Horton and the Kwuggerbug and More Lost Stories / Dr Seuss 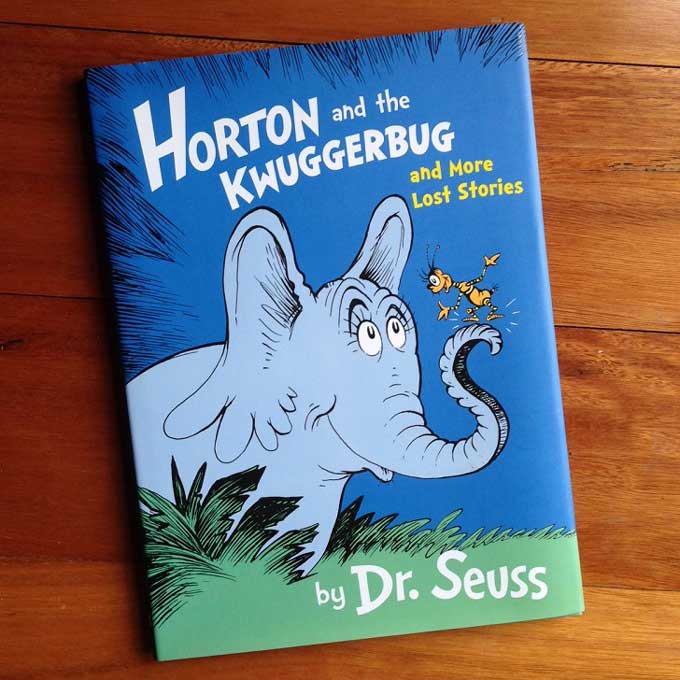 After reading What Pet Should I Get?, I was nervous. But that was a recently discovered unfinished draft that went to print without Seuss’s usual redrafting and editing. It lacked the finesse of his back catalogue.

By contrast, Horton and the Kwuggerbug contains shorter stories collated from magazines to which Dr Seuss contributed in the 1950s. And, to borrow from the blurb on the inside cover, they’re vintage Seuss!

The stories also have links to other well-known Seuss stories, whether by characters, locations or the traits of those in the books.

There are four stories in this collection, and they start with Horton himself. Horton and the Kwuggerbug is the tale of an enterprising Kwuggerbug who takes Horton for a ride. Or, more accurately, convinces Horton to take him for a ride (first across a crocodile-infested lake, then up a treacherous mountain), then attempts to make off with the goods.

There are insults that won’t impress some readers – “Climb! You dumb elephant, climb!” is a particular standout that could have done with some updating for the new millennium – but the rhyme and rhythm are Seuss through and through, and there is a strong moral lesson when the Kwuggerbug gets his comeuppance. 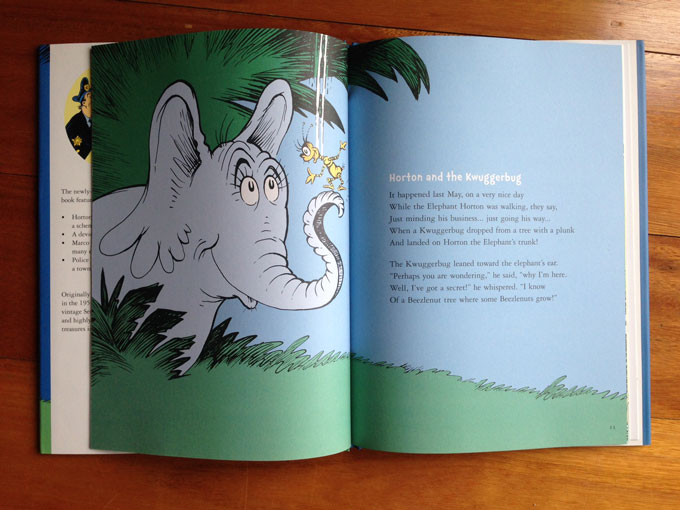 The second story, Marco Comes Late, is my favourite. Marco is late to school, and forced to come up with an excuse. The excuse gets bigger and bigger, and this short story is reminiscent of the longer (and very popular) And to Think That I Saw it on Mulberry Street.

The final story is The Hoobub and the Grinch. It’s not the Grinch we’ve all come to know and love (or hate, and then love) from How the Grinch Stole Christmas!. It’s a relative, perhaps. A long-lost Grinch friend.

This Grinch is a wily salesman, and reminds me of Sylvester McMonkey McBean (the Fix-It-Up Chappie from The Sneetches). He interrupts the Hoobub’s contemplation of the wonderfulness of the sun to convince him that a piece of green string is better. 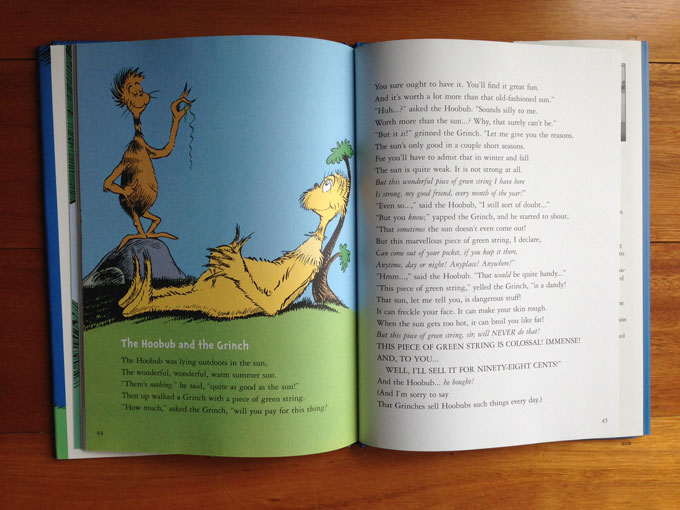 Dr Seuss is my literary hero – I’ve reviewed his books before, I’ve attempted to recreate his writing style before, and Fox in Socks has a permanent place in the list of our family’s favourite books – so it’s no surprise that I love this one, too. Highly recommended for ages three and up. And if your kids are ages five and up, there are some great discussions to be had about respect, honesty and wiliness.

You can purchase Horton and the Kwuggerbug and More Lost Stories from Booktopia here, or from Book Depository here.

Have you read Horton and the Kwuggerbug? What did you think?

« #IKidneyCheck because… (Kidney Health Week, May 22-28)
(Apparently) controversial things about me »