They are, of course, talking about a particular definition of the word stroke.

But what I’ve discovered as someone who has been affected by stroke (and who lives her life knowing she’s at risk of suffering one herself) is that many of the definitions suit. 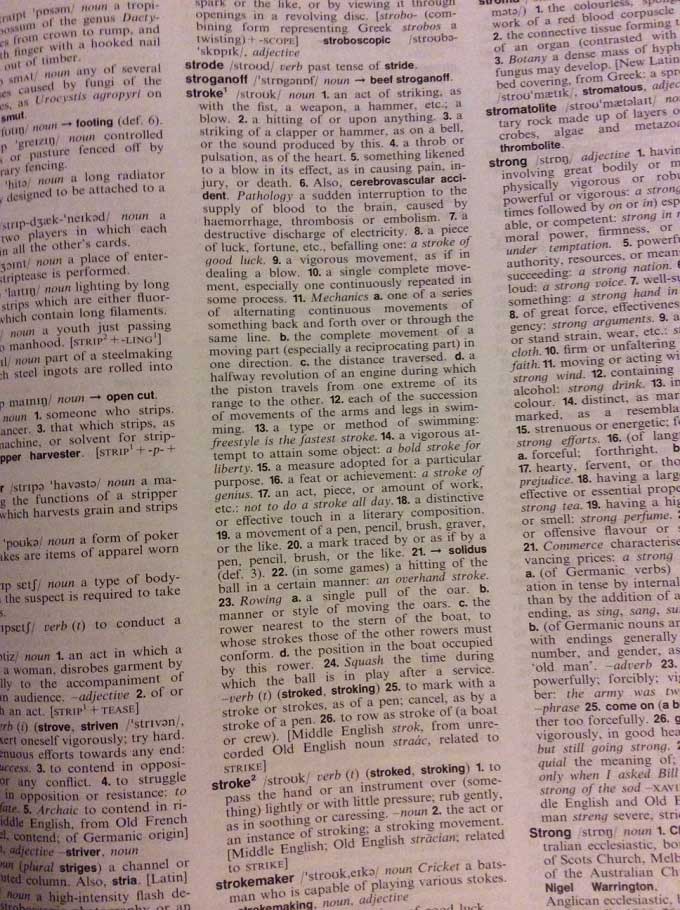 stroke(1) noun 6. Also, cerebrovascular accident. Pathology a sudden interruption to the supply of blood to the brain, caused by haemorrhage, thrombosis or embolism.

My dad died when I was 12 years old. I kissed him goodnight one evening and went to bed. Late that night, he suffered a stroke. By the time I got home from school the next day, he had died.

I caught a few words of the explanation of his death – ‘he had a bubble on his brain and it burst’ – but I didn’t make the connection between these words and the word ‘stroke’ until later in life. Even then, I didn’t really get it.

Not until I was sitting opposite a neurosurgeon, being told I had a number of these ‘brain bubbles’ myself.

If the word ‘stroke’ had penetrated that wall of noise back then, perhaps this is how I would have pictured it. A mighty blow striking my father down with force.

stroke(1) noun 5. something likened to a blow in its effect, as in causing pain, injury, or death.

Perhaps I would have thought of it in this way. A metaphorical stroke. Of course he died of a stroke; that’s what strokes did. They caused pain. They caused death.

stroke(1) noun 8. a piece of luck, fortune, etc., befalling one: a stroke of good luck.

Or perhaps I would have thought of it in this way. A stroke of bad luck. How else to explain the sudden removal from your life of one of the most important people in it?

stroke(1) noun 13. a type or method of swimming: freestyle is the fastest stroke.

Dad died. Life carried on. It didn’t feel right. After an initial outpouring of grief and incomprehension from people around us, everything was supposed to go back to normal.

Our stroke during this time? Treading water. No freestyle. No breaststroke, nor even a floundering, gasping for breath, beginners’ form of butterfly. Just staying in one place, trying not to go under. And sometimes, a backstroke.

stroke(2) verb (t) 1. to pass the hand or an instrument over (something) lightly or with little pressure; rub gently, as in soothing or caressing. –noun 2. the act or an instance of stroking; a stroking movement.

This was the stroke that helped as I navigated life without my dad after the ‘other’ kind of stroke.

A stroke on the hand from mum. A stroke on the head from an uncle. Strokes on the face from an aunt as she wiped the tears from my cheeks. A stroke on the back from a teacher as she hugged me when I returned to school (and whispered while doing so, “I’m not really allowed to do this.”).

Strokes of comfort. Strokes of understanding. Strokes of not knowing what to say, but knowing that gestures could be more powerful than words.

Have you or a loved one been affected by stroke? Please share (if you feel you can).