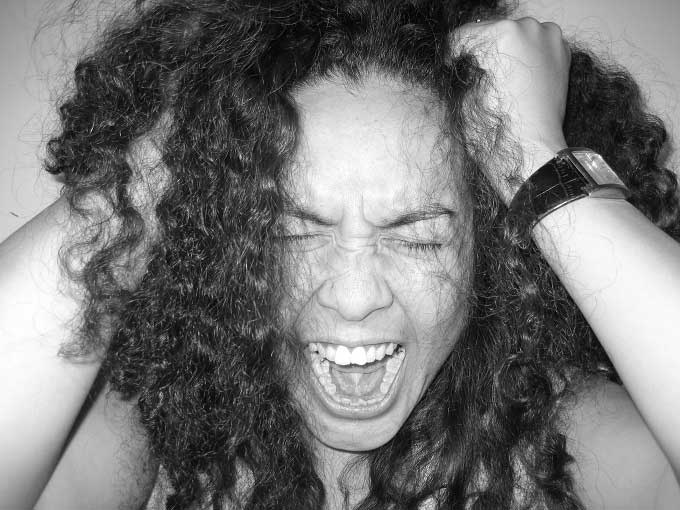 Alternative (but less catchy) title: How I try to stop myself from yelling at the kids and succeed most of the time. Okay, some of the time.

I love my kids. Adore them. I think they’re great kids, in that totally non-biased way where even though half of the genes they’re carrying came from me, I’m certain I’d love them just as much if I weren’t their mother.

But, man, they can be hard work. All kids can. And sometimes, just sometimes, I can feel the blood pressure rising even more than usual. I can feel the frustration building, the heart rate increasing and the teeth gritting as I try to calmly and rationally explain for the gazillionth time why they can’t have cake for breakfast.

(Breakfast. Yep. It’s possible to lose your cool before breakfast.)

The thing is, I don’t want to be a yelly mum whose kids only behave because they’re terrified of the consequences of not behaving. I think yelling has its place – kids have to know they’ve crossed a line sometimes – but I also think constant yelling is better described as bullying.

So when I feel myself growing and turning green, I try a few simple things before HULK SMASH QUIET KIDS AAAAARGH EXPLODE.

These are things that generally work for me. They’ve been tried and tested on me and my kids. That is my entire statistical sample. They might help you. They might not.

But here they are.

Ask myself what I’m really angry about

Is it even about the kids? Or am I angry because we’re out of milk and I really wanted Corn Flakes this morning, and I’m taking it out on them?

Or am I angry because I just heard someone on talkback radio start a sentence with, “I’m not racist, but…”?

Is it something they’ve done? And if so, did they have control over it? Is yelling going to undo it?

An extension of this is asking myself who I’m really angry at. Is it the kid I’m about to yell at? Or has a sibling used up all my patience that morning? Am I about to yell at my five-year-old daughter because my two-year-old son took fifteen minutes to put socks on, and then she had the audacity to ask for a drink?

More often than not, I want to yell because of a combination of all of these factors. But by the time I’ve thought through them all, that instinct to yell has gone and I can just deal with the situation. Which may or may not include some stern words, but words which will be delivered in a suitable way.

Ask myself if it’s that important

This is hard for me. Confession time: I like structure and routine. (Friends, I know this is a shocking revelation. Pick your jaws up from the floor. We’ll get through this.)

So when the kids throw me out of whack, whether through changed plans, changed timetables or changed ANYTHING, I feel frustrated. It doesn’t often come to yelling, but sometimes, when combined with other frustrations, I feel the tension bubbling up.

So I ask myself if it’s that important. And the answer is usually ‘no’.

I have told my children that if I can feel myself about to yell because I’m frustrated, I might leave the room to calm down. I have explained that just like them, mummy gets annoyed and tries to control her feelings by removing herself from the situation.

And I explained it to them in third person just like that. Because mummy can, that’s why.

My five-year-old understands this most of the time. If she is hurtling down the one-way track towards meltdown, my leaving the room will push her right to the edge immediately. But if she is just being persistent and using the opportunity to fine-tune her whining, my leaving the room won’t just calm me down. It will calm us both down.

My two-year-old? Not so much. He’s not ready for this one. He just sees mum leaving when he’s upset and starts screaming. Understandably. So if I need space from the five-year-old, he comes with me. And if it’s him or both of them that are pushing me to my limit, I jump straight to the next strategy.

Okay. This is it. I am about to change people’s lives. Publishers, I am ready and waiting to write your next best-selling parenting guide. Drumroll please…

Seriously. This is what I do. If I’m frustrated with something the kids are doing or saying, and I’m too far gone into that frustration to go down the logical thinking routes I’ve outlined above, or I’ve already tried those and they’re STILL asking for cake for breakfast, I turn what I’m saying into a song.

Try it. Pretend I’ve just asked you if I can have some cake for the thousandth time. In my whiniest voice. And stomped my feet a few times for good measure. And you reply with:

FOR THE THOUSANDTH TIME, NO! YOU CAN’T HAVE ANY! FOR THE LOVE OF GOD, LEAVE ME ALONE FOR TWO SECONDS!

Now try singing it. See how it sounds.

This is not just a tactic I employ when I can feel myself about to yell. This is one I use when I’m already yelling and want myself to stop. (Have you ever started yelling before you even realised you were going to yell? Your secret is safe with me.)

Turn it into singing. Instantly. The kids will stop howling. They might even join in. At worst, they’ll look at you quizzically, declare you a silly-billy, and walk away.

At best, you’ll all sing along to some funny, improvised song about how it would be so lovely if we all spoke nicely to each other instead of screaming and kicking our legs on the floor, and then have a squidgy group cuddle where each child proclaims their love for you and your ovaries scream CLUCK CLUCK.

Just sing. It’s the answer to everything.

How do you stop yourself from yelling at the kids? What are your sure-fire tension-diffusing tactics? I’m all ears. And all song.