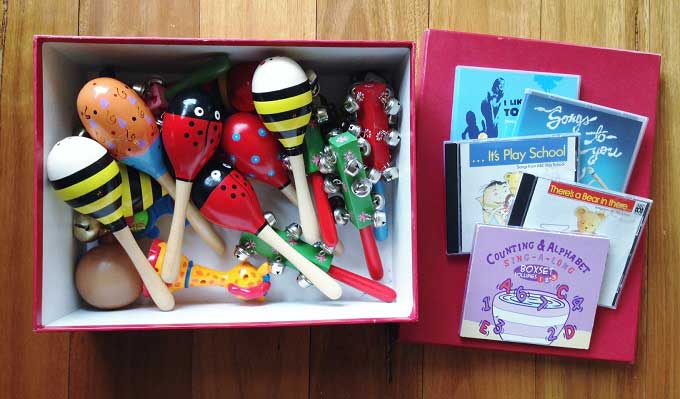 Every Wednesday morning, I host a music group for toddlers at my house.

I willingly invite babies, toddlers, children and their parents into my house to sing songs for half an hour, have some morning tea, play for a while, then leave in a whirlwind to return home.

Am I crazy? Maybe. Do I love it? Absolutely. And, more importantly, so do my kids.

So, how do I do it? That’s what I’m here to tell you. In this post, I’m going to outline what you should consider if you’d like to host a toddler music group, including everything from the bleeding obvious to some optional extras. Then each month, I’ll share a music group program. You can use it as is. You can use it for inspiration to create your own.

Or you can simply marvel at the fact that anyone would ever willingly host babies, toddlers and children to do this. Every. Single. Week.

(Seriously, if you had asked me five years ago if I’d ever do this, I would have laughed. LAUGHED. Until tears streamed down my face.)

The photo on the left is what my living room usually looks like (or what it used to look like before we got a television that you can see from space). And the photo on the right is how I set it up for music group.

The couches are pushed to the sides, creating a big space on the floor. Speakers are covered so that curious fingers don’t poke holes in them. Toys are packed away and hidden as best as they can be so that they aren’t played with and scattered around before music group starts.

Safety is also a big consideration. We have staircases in our house, so even though my youngest is fast approaching an age where they won’t be necessary, we’ll keep safety gates on them for as long as I continue to host music group.

Our music group has grown organically. A friend started the group, and invited parents and children from our mother’s group and from her church.

The group has changed substantially since then. People have moved away from the area. Friends of the group members have joined. Their friends have joined. And one neighbour dropped in one day because her children saw toddlers entering the house en masse and was curious about it!

If you’re not sure where to start, start with your friends and any groups you’re involved in. Then think more broadly. What other activities are your children involved in? Can you invite friends from the library? Swimming classes? Ballet? Is there a noticeboard at kinder or your local Maternal and Child Health Centre? Ask friends to invite their friends. Ask your friends’ friends to invite their friends. You’ll fill a group in no time.

Work out the best day and time for your group. Think about the ages of the children involved, when they nap, how long it may take some people to get to your house and what time would be best to serve morning tea (or afternoon tea or lunch!) afterwards.

And as host, you have the right to be selfish here. If the day that suits most people is already a hectic one for you, say so. Better yet, rule it out from the start. While fun, running a music group can be stressful. Make it as a stress-free as possible.

I take a structured approach to music group. I (or sometimes another parent in the group who might offer to run a series of sessions) will come up with a program to last four-five weeks, which makes for two programs per school term. We theme our programs so that the children can learn about a particular thing or concept. It also makes developing props a little easier (more about props later).

Each of our music group programs begins and ends in the same way. We have a ‘hello’ song during which the host welcomes everyone by name (it’s really fun and the thought of leaving someone out or forgetting a name is NOT AT ALL terrifying) and a ‘goodbye’ song during which we wave goodbye to each other. Before eating and playing together for at least another half hour. But it works, I swear!

I then type and print lyric sheets for each program. When the program is complete, each child can take a sheet home and keep singing their favourite songs from music group.

Our themes last year included Things You’ll Find in the Sky, Alphabet, Counting, Farm, Australian Animals and Christmas. (And next month, I’ll start posting some of the music group programs we’ve created, along with additional song and prop suggestions!)

Here’s another area where everyone might take a different approach. You might find versions of the songs everywhere and play them on CD or computer. If you play a musical instrument, you might accompany the parents and children as they sing. Or, if you’ve chosen simple songs, you might choose to sing a cappella.

We take a varied approach to this. Most of the time, we source versions of the songs and play them from a computer (through the stereo in my lounge room). When someone else is running a program, I sometimes play piano accompaniments to the songs. If we are singing well-known songs for a particular program, or if we have been doing a particular program for some weeks and the children are all familiar with the songs, we will sometimes sing without any musical accompaniment. (Admittedly, it helps that no-one in our group is shy, and there are quite a few singers and choir members among us!)

When I post music group program suggestions on this blog, I will include links to CDs, YouTube clips and sheet music where I can find them. (And I will update posts if they become available later on – so if you read about something you know the music for, please do tell me!)

Children don’t need much to engage with music. Often, the music itself is enough. But sometimes, either because of the song or because you want to really drive a message home, a prop is fun. Sometimes even necessary. 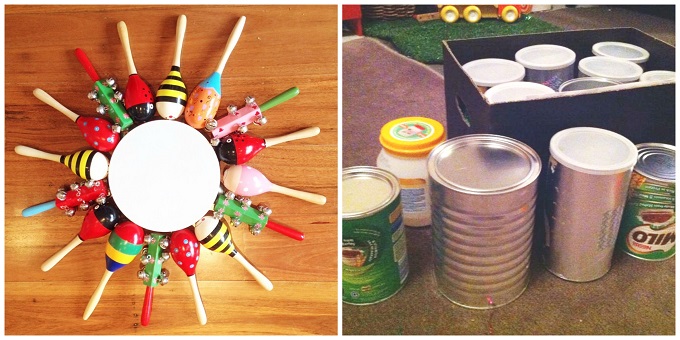 Specific props we have sourced or made for our programs include an alphabet poster, hippopotamus cards, a corroboree frog (of the stuffed, non-poisonous variety!), a felt tree with Velcro animals and a kite. We have also occasionally included a craft activity at the end of music group where the program was shorter or where we thought the children might be interested. (By we, I mean other people. I’m not a clever crafty clogs at all.) We’ve made watermelon to kick off a food program, elephants to round out an animal program, and spiders with which to tease Little Miss Muffet.

As with CDs and sheet music, I will include prop suggestions with music group programs. And where we have included a craft activity, I will describe it to the best of my ability, with full disclosure that I am not at ALL crafty and that any craft activities undertaken were led by a different parent!

Are you going to send everyone straight home after music group? Or do you want to host morning tea/lunch/afternoon tea? If so, how? Do you have enough seats? Do you need people to bring high chairs? Do you want everyone to bring a plate each week? Or perhaps take turns in providing food? What about any dietary restrictions/allergies?

What do I do? I have a very large kitchen table. In addition to our table chairs, we have a two-seater piano stool and a two-seater ottoman that are the right height for the table. We also have two high chairs. On the six occasions to date that this hasn’t been enough seating for morning tea, some children have shared seats and others have simply waited for the first group to finish before sitting down to take their turn. We’re yet to have tantrums (touch wood).

But you don’t need chairs. You could put a picnic blanket or two down on the living room floor. Or in the backyard. You can take the catering and play outside. You could take the whole session outside! Or you could scrap the catering consideration altogether. So many options.

Step 8. Strategically place your cloth, surface spray, broom, dustpan and brush where all the parents can see them so they help with the clean-up efforts before leaving.

What? No, of course I don’t do that. What an outrageous suggestion. I’m offended.

What do I mean? Good question. Wrapping up music group and saying farewell is something I didn’t really consider to begin with. For the first few sessions, people left at different times, some children got upset as they realised their friends had left (or that they were leaving before their friends), and my children in particular had a rather spectacular ‘comedown’ crash and burn after going from having dozens of people in our house to having just boring old mum again.

So think about how you’ll manage the farewells as people leave. After the chaos of early days, we have naturally developed an unofficial ‘end’ where one of the parents will read a story (which is tied to the music group theme where possible). 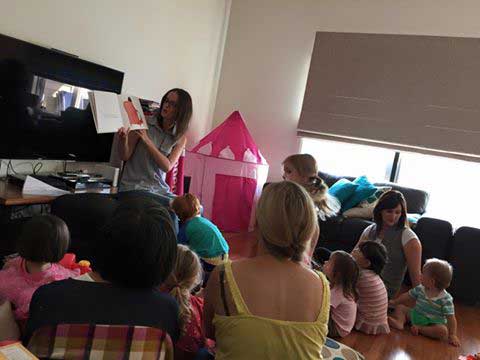 We then sing the goodbye song again, and everyone leaves together as my children wave goodbye. There is still a sad moment at the end, but the tantrums and mega-sulks have all but disappeared.

(And sometimes – just sometimes, I swear – we follow everyone out the door and head to the local fish ‘n’ chip shop for a special treat lunch.)

Have I scared you with this list? Sorry. The best advice I can give you is just to get in there! Host it! Tick as much off this list as you can, but just start and see what happens. Just invite people over, sing the first songs that come to your head, and ask for feedback. Dance a little. Find some props stashed around your house. Engage with the kids, and ask them what they’d like to do.

Your own little music group will grow in its own way, and then I’ll be visiting your blog looking for advice!

Do you host or attend a music group? Do you have any suggestions, insights or anecdotes to share?

If not, would you? Could you? Or have I just described your worst nightmare?