Ashleigh found a book of mine yesterday. She brought it out to me to read because she liked the pictures of animals in it. But it wasn’t a children’s book.

The Blue Day Book by Bradley Trevor Greive. It was released in 2000 and has sold a million bajillion* copies since then. (*I made this stat up, although it’s probably very close to the truth).

Why do I own this book? All because of a single day in my life.

Rewind to late in the year 2000. I was at university, living on campus. I’d hurt my toe a few days before playing volleyball. This sounds like nothing, but if you can picture a black and blue, toenail-less stub of something that kind of resembles a toe, but looks more like something you’d find in a box in a horror movie, you’ll understand what it was like. It throbbed constantly, and I couldn’t put pressure on it at all.

I had an essay due at 5.00pm and, as most people do when they’re at university, I’d pulled an all-nighter finishing it up. It was for a Commerce subject, and it had taken me ages to get the right symbols in the right places and format it correctly.

It was approximately 5.57am. Approximately. I typed the last reference into my bibliography. I held down the Ctrl key with my left pinky. My ring finger was on its way to the S key when…

The power went out.

I panicked. I freaked out. I absolutely and totally lost my head. I knew that I hadn’t saved the document once during the mad, frenzied all-night typing. Auto-save didn’t exist then, or if it did, it hadn’t yet been installed on my prehistoric machine.

The power stayed out. The panic escalated.

The power stayed out for just under an hour. When it came back on, I searched in vain for the document on my computer.

Well, not entirely in vain. The document was there. I breathed a sigh of relief and opened it. To see the title.

I cried like a baby. (My college room-mates can attest to that – pre-7.00am wake-ups are at least five hours too early for your average uni student.) I searched. I spent hours trying to find pieces of the document on the computer and stick them back together in an assignment collage instead of simply rewriting the assignment.

I finally resigned myself to the fact that I would have to do it again. I sat there and retyped the assignment – what I could remember of it – hitting Ctrl+S after every sentence.

At 4.00pm, I decided it was as good as it was going to get. I also realised it would take me at least 45 minutes to make it the 700 metres down to the Commerce building. I hit Ctrl+S (even though I just had), then Ctrl+P, then Ctrl+S again (just to make sure), and grabbed the printout. I hobbled into university on my black and blue toenail-less stub of something that used to resemble a toe to hand it in. I made it on the dot of 5.00pm, just as the tutor was collecting the pile from the submission desk. One minute later and I would have had 10% of my marks deducted, something I was sure my last-minute rehash from the top of my head couldn’t withstand.

My foot was throbbing, I hadn’t slept, I’d wasted an entire day redoing something I’d spent all night on, I was certain I’d just handed in a rambling load of rubbish, and Cameron was away and uncontactable that weekend so wouldn’t be around to cheer me up. (Too bad there was no Twitter back then so I could write about my #firstworldproblems.)

So I did what all uni students do when they’re in need of cheering up.

I went to the bottle-O.

Being a classy chick from the country, my drink of choice back then (and even now on the extremely rare occasions I enjoy an alcoholic beverage) was Bundaberg rum. I purchased the bottle with the last of my savings and started the hobble back to college.

Halfway back, I dropped the bottle. It happened in slow motion, yet I couldn’t react fast enough to catch it. I watched in horror as the bottle drifted down, down towards the pavement.

Then heard the tinkling smash and the glug glug glug of delicious rummy goodness flowing down the gutter.

I cried like a baby. (My college room-mates can attest to that – they were far more sympathetic to my plight of lost alcohol than they had been to my plight of a lost assignment.)

When I finally hobbled back to my room, I did what everyone does when there’s nowhere else to turn.

I called my mum.

And she let me sook, rant, rave and cry like a baby. She didn’t bother suggesting that I could have done my assignment earlier in the week, that someone with my natural levels of coordination and grace should perhaps not play sport, or that there’s no use crying over spilt rum. She was just my mum.

And the following week, she even sent me a book to try and cheer me up.

With a special message at the front. 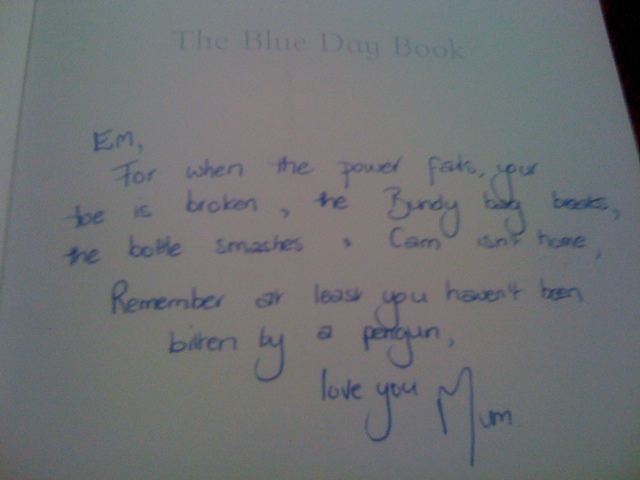 Something I’ll try to remember from now on. When the days are tough, when nothing seems to be going your way, and when you can only see the bad in your life, remember at least you haven’t been bitten by a penguin.

Unless you actually have been bitten by a penguin. In which case, I recommend a bottle of Bundaberg rum. Wrapped in bubble wrap.


Have you ever experienced a day that was a comedy of errors from go to whoa? What words of wisdom do you rely on to cheer yourself up?