Two years ago, I had the distinct pleasure of interviewing David Astle.

Name ring a bell? It should. He’s an author (and if you’re not familiar with his work, I suggest you start with Puzzled). He was the ‘dictionary guy’ on quiz show Letters and Numbers (and now that I’ve brought it up, a little note for SBS: please bring back Letters and Numbers!). And he is the curator of my word-wrestling nightmares. Which is a fancy way of saying he compiles the cryptic crosswords for The Age and The Sydney Morning Herald’s Friday publications. Fri-DA, as I like to call it.

Two years ago, I interviewed David for The Shake about his involvement in creating a brand new word. The word? Phub. 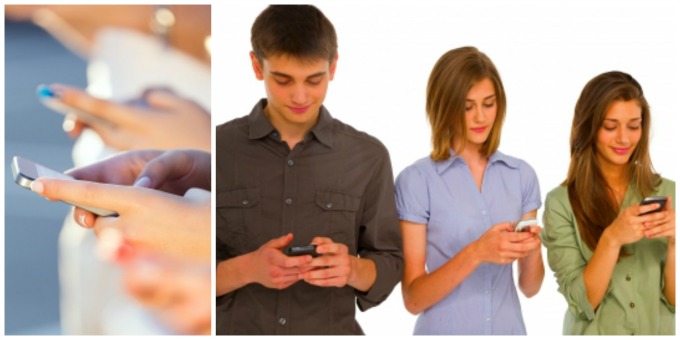 (Images courtesy of nenetus and Ambro at FreeDigitalPhotos.net)

I saw him again recently, and asked him whether it had stuck. He shook his head. Phub was dead. It had never gained traction. It was being ignored. Perhaps it had been phubbed.

Last week, I saw an article that discussed phubbing. And that article was quoting a journal article. Phubbing has made it to the world of academia! It is time to re-embrace phubbing! (Which, ironically, probably means not embracing those around you.)

Now, republished with permission from The Shake, I bring you the interview that once happened. My tenuous claim to word nerd fame. Here is my interview with David Astle. Enjoy.

Who was involved in the creation of the word ‘phub’? How long was the brainstorming and selection process?

I was invited about a month before the meeting, around April 2012, and had no real clue who was organising the event, or why. Of course, as a word nerd with a childhood dream to create a word, that hardly fazed me.

I made the trip to Sydney Uni on a gloomy Thursday, May 24. The meeting place was the Senate Room of the Great Hall – very Hogwarts in grandeur. There I met about 12 participants, including Sue Butler, the editor of the Macquarie, Kel Richards, a former RN presenter, a young debating champ called Clementine Kind and others. Cameras and lighting crew made up an even 20.

The mission was to invent a word inside a day. The word’s definition was put on a PowerPoint screen by Adrian Mills, the group account director of McCann, the ad agency involved. The definition was:

(n) the act of holding a mobile phone in a social setting of two or more people, and then interacting with that mobile phone and not the people in that setting.

We split into groups of four, where brainstorming began. Our approach was scattergun, jotting things down from phonewalling to e-scaping, from nuthering to frolling. We sat in a circle and percolated possibilities: thumbrage and toxing. Later a group delegate fixed the sheet to the wall and introduced the room to each inkling.

What were the criteria for creating and selecting the word?

Catchiness was one. Was it easy to adopt? Did the word sound like a word, as opposed to a fabrication by committee? And did it sound right? We wanted the word to reflect the habit in a brusque and effective way.

Also, could the word exist in isolation and still be understood? (We were trying to avoid what word nerds call polysemy, where a word could be ambiguous, or carry several meanings.) By the same token, homophones weren’t great either, as the word could be easily muddled.

The other aspect is known as mass saliency. Could the candidate be morphed into noun and adjective and verb and so on. I Xed. It was very Xy, or a little Xish…

What other words made the list, including those culled early and other serious contenders?

We took votes at the opening phase, selecting three words to salvage from each group, leaving us with a dozen candidates for the later elimination rounds. To complete the 12 were words such as igging, bitting, nubbing, phoneslapping and egophoniac.

What was your personal favourite?

I loved phub (and phubbing) very early in the game. Not just because I was the coiner, but it seemed oven-ready, primed for widespread use. There was the hybrid root of phone + snub, which made the genesis clear to a newcomer. Then there was that semi-rude echo of another four-letter word we know so well, on top of the PH-tradition of other techie treachery, such as phone phreaking from the 1960s, and phishing from the online era.

I was also fond of toxing – that blend of poisoning and texting – and the rude hipness of igging. “Hey honey, stop igging me.”

Do you think ‘phub’ will stick? Have you heard it used in casual conversation?

Phub has already stuck. McCann was shrewd to recognise a vacuum – a universal space that demanded a label. I knew we’d anointed the right baby as both my sisters independently referred to the term only a matter of months later – one quoting an article she’d read in the paper, the other having no idea of its source, as though the word was always there. Little did they know their big brother had played an active role in bringing the word to life.

The sequence that needed to occur, in order for phub to qualify as a legit word, relied on the group’s active dispersal, and yet discretion as well. Trumpeting the backstory was taboo. That would only seem advertorial. Instead, we each unleashed the word through our various channels, including the brilliant Stop Phubbing website, and then sat back, allowing society to decide on the term’s appeal.

A year and a half later, more than 181 countries have cited phub, and several dictionaries are considering the word’s arrival. The time felt right to reveal the conspiracy.

How would you clue ‘phub’ in one of your crosswords? (Or have you already?)

Not yet. That would seem a tad ulterior. But I’ll be tempted soon. As for a clue, what about: Apple’s core centre to misuse smartphone. (That’s P + HUB, if you’re not a cryptic kind of person.)

What other technological/social phenomena do you think are crying out for new words? Care to suggest some?

It staggers me to think that English still lacks a collective word for nephews and nieces. As well as a label that applies to your son- or daughter-in-law’s parents.

Away from the family tree, we need a word for the habit of documenting a moment (with phone camera, or Twitter) rather than simply experiencing the moment.

Have you heard or used the word phub?

And what words would you like to see introduced to the English language? Any suggestions for a collective word for nephews and nieces, a label for your son- or daughter-in-law’s parents, or the habit of electronically documenting a moment instead of experiencing it?

* This post contains an affiliate link. If you click to purchase the book, I earn a little commission, but you don’t pay any extra.