Before we went to the beach, I went to the library to hunt down the perfect beach read. I was thinking something simple, perhaps even something trashy, that I could duck in and out off without losing track of what was going on.

I left with something very different. Still something to duck in and out of, but something far from trashy. I left with the recently released collection of poetry, The Best Australian Poems 2014, edited by Geoff Page. And this is what I thought of it. 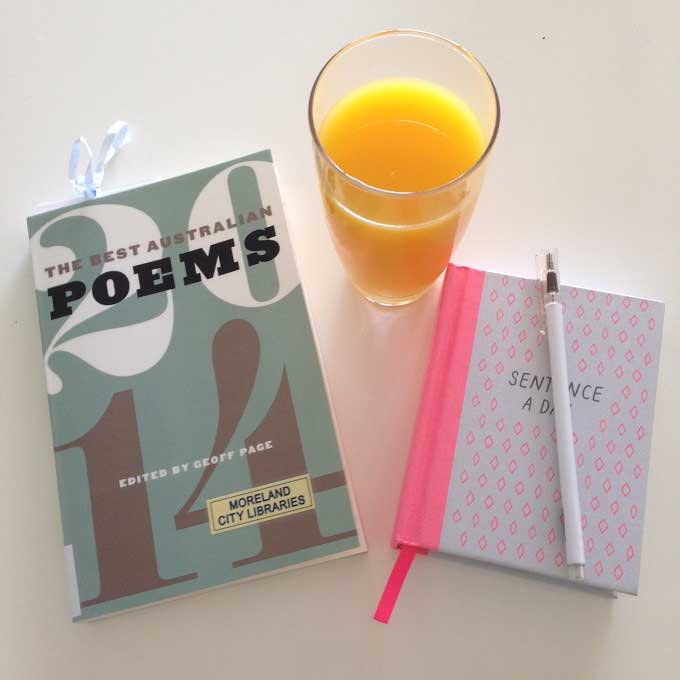 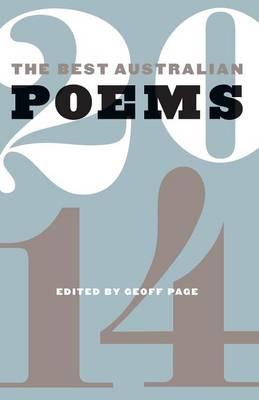 I borrowed this book so that I could put it down between poems without losing track of what was going on. But that backfired when I just wanted to keep reading.

The poems contained within this volume are varied. A wide range of authors, a wide range of topics and a wide range of styles. Some rhyme; most don’t.
Some
have that seemingly
random spacing
that doesn’t seem to make sense
until you look
beyond
the words
to the rhythm
and the greater
meaning.

Some poems you read, nod, then move on from. Others require more than one read. Others demand silence and contemplation.

And most induce feelings of awe and inspiration.

It’s a lovely little collection. Page has selected poems that remain accessible (especially for those of us whose knowledge of poetry and poetic form is, ahem, a little more basic than we’d like to admit). I usually include standout lines in these book reviews, so this time I’d like to include a few of the poems (or excerpts of the longer ones) that stayed with me:

Hüttler or Huettler
at seventeen had remained
in watercolour been accepted
at the Academy of Fine Arts Vienna
even become a priest as once intended
the swastika would still signify
auspiciousness in Sanskrit
Israel wouldn’t exist
no Berlin or West Bank walls
holocaust would refer to
a burnt offering of Moses
WWI would still be The Great War
I would have had one more uncle.

The central library
full of Hebrew,
Christian and Islamic
books was bombed.

The pages exploded
far into the sky.

For days the citizens
were brushing their
forefathers’ thoughts
off their shoulders.

Eighty years on, tourists look down
and out through viewfinders. They pay well
to walk over the arch in bright overalls,
sliding in chains along the safety rails.
Not even a Southerly Buster can blow them away.

No-one was fit; they did not give a shit in the 40s.
They made love all night and washed their steaks down with champagne,
Died like flies in the wars, smoked, and visited whores,
O Casablanca, O Bogey, O play it again.

The Best Australian Poems 2014 is a highly recommended read for lovers of poetry, and also for those who think they might, maybe, perhaps would like to give it a go, but have never known where to start. You can purchase it from Booktopia here.

Have you read The Best Australian Poems 2014? What did you think?

*The links in this post are affiliate links. If you click to buy the item, I earn a little commission but you don’t pay any extra.

« Some things you should know about me
Mix it Up! – Herve Tullet (book review) »