I was recently discussing pronouns with a close friend. (Don’t you just wish you were my friend? Constant conversational parties around here. PRONOUNS. WOOT.)

It started with a discussion of gender-neutral third person singular pronouns – traditionally ‘he’, ‘she’ and ‘it’, but with a recent (arguably) addition of ‘they’.

We digressed, and moved on to other pronouns. (Conversational party. WOOT.) And we inevitably made it to ‘you’.

She decried the use of ‘youse’ (or ‘yous’, or ‘yas’) for the second person plural pronoun, and said it would never be accepted.

I mentioned it had already made it to the dictionary. 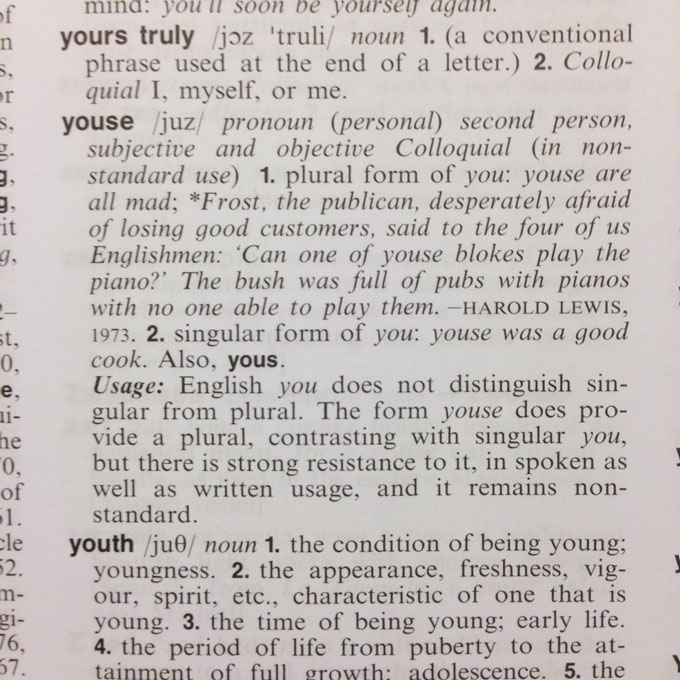 We had the usual conversation after this. HOW COULD THEY? How could they deface the English language with such an inclusion?

I gave the usual reasons. Dictionaries are descriptive, not prescriptive. The usage note clearly states that this is ‘non-standard’ use, which is dictionary code for ‘people will laugh at you if you use this word’ or ‘CAUTION: use of this term may have boganic undertones’.

We’ve all heard ‘youse’, we all understand what it means, and if we’re truly honest with ourselves, we’ve all probably said it at least once in our lives, even if it was in a supposed-to-be-ironic sense. Ironic or not, usage is usage, and meaning shifts and acceptance take time.

But she wasn’t having a bar of it.

There were the outraged:

There were those who appreciated the need, but rejected the actual word:

And there were those who accepted it (and even thought it genius!):

My two cents? Anyone who knows my linguistic background can probably guess. I love it. I will never, ever use ‘youse’ non-ironically. But I love that speakers of English filled this gap in our language with a word that makes sense. Why invent something unrelated to the current term when the usual convention for creating a plural in English is to add an ‘s’?

And my favourite part is when the ‘s’ isn’t plural enough. Then we get second person plural pronoun phrases like ‘all of youse’ and ‘youse guys’. Usually with some extra syllables for clarity. YOUSE GUUUUUUUUUUUYS.

*contented sigh* I love English. And if your sarcasm detector is buzzing, turn it off. I mean it. I. Love. English. All of it.

Even the ‘ugly’ bits.

What’s your view on ‘youse’? Clever? Abominable? A necessary evil?