Last week, Oxford Dictionaries announced the ‘Face with Tears of Joy’ emoji as its 2015 Word of the Year (for the US and the UK).

For what it’s worth, I don’t emoji. I’m not cool enough. (Remember when you were a kid and you had to program the VCR for your parents and you thought they were LAME with a capital L-A-M-E? I feel I’ve reached that stage of LAMEhood a lot earlier in life than my parents did.)

But I’m still a big fan of this announcement, and I’m impressed with the team that made the decision and announced it to the world. They would have known that the purists would be OUTRAGED that a non-word would be chosen as a word. (In fact, maybe that was the point. Who doesn’t love a good language debate?)

But they stuck with it. This was the single most popular emoji worldwide in 2015. It captures so much in a single image, and is understood across borders of language, literacy and sarcasm.

Besides, is it really a non-word? What is a word? This from the fifth edition of the Macquarie Dictionary:

word noun 1. a sound or a combination of sounds, or its written or printed representation, used in any language as the sign of a concept.

The sign of a concept. The concept of shedding tears of joy, perhaps? Or of laughing until you cry?

If a picture is worth a thousand words, then an emoji has to be worth … well, at least four. Take these two. ‘Face with Tears of Joy.’ ‘Smiling Face with Sunglasses’.

Just as there are subtle differences in use with words, so there are with emojis.

I challenge you to pick one of the potential meanings of either of these emojis, then think of a single word that would express that meaning. A single word. Can you do it?

I can’t. I really can’t. “I just laughed until I cried. What a pisser!” “Living the life, bro. All cool.” Neither of these conveys the strength of the emotions as well as those little pictures, and they use far more words. And ‘lmao’ and ‘cool’ certainly don’t cut it.

That’s why emojis are so useful. So powerful. So popular. And, whatever your view of them, that’s why they’re here to stay in our largely electronic world.

Adding them to the dictionary should be interesting, though. Stay tuned in future years for how that plays out. Will we have separate emojionaries? (Too bad ‘Pictionary’ is already taken.) And how will the images be ordered? What system do you use when alphabetisation isn’t available?

Sorry. Tangent. That happens when I talk words. Back to the Word of the Year announcement.

I was very happy to see ‘they’ in the shortlist for words of the year. 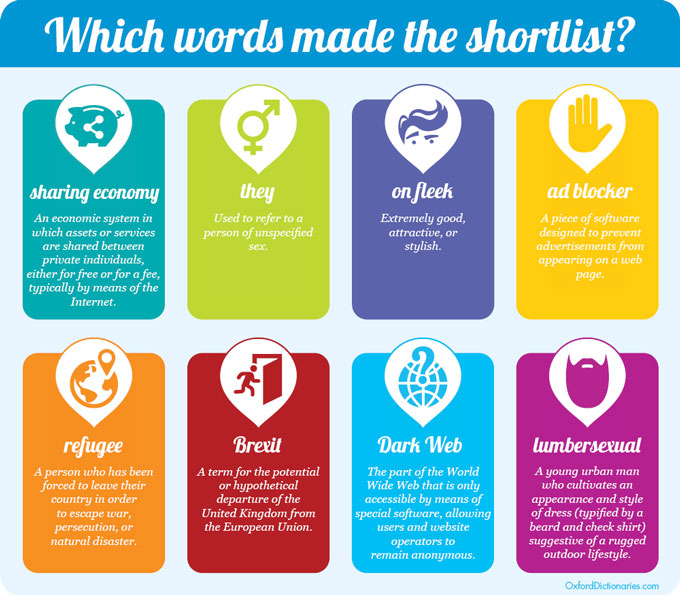 Not as a new word, of course. ‘They’ has been the third person plural pronoun FOR. EV. AH.

But it has now gained widespread acceptance as the gender-neutral third person singular pronoun.

When I wrote about ‘they’ earlier this year, I remember one Twitter reader replying with, “Nope. Never gonna happen. ‘They’ is plural. Period.”

Unfortunately for them, they were wrong. *insert ‘Face with Tears of Joy’ emoji here*

Meanwhile, the Oxford Dictionaries Australian Word of the Year is yet to be announced. And Macquarie Dictionary will wait until 2016 to make its decision (using the novel approach of waiting until the year is over before choosing the word to define it).