I was so excited when Ashleigh was given this toy for her first Christmas. 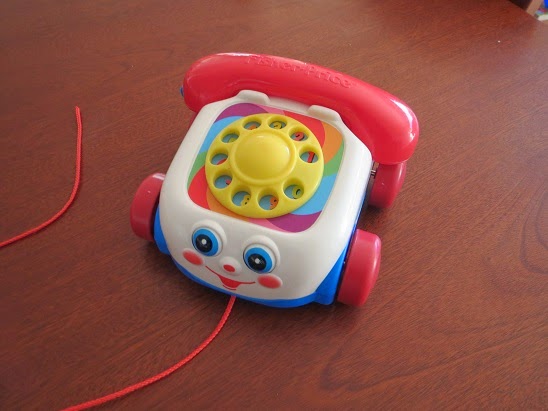 I had one of these when I was younger. I loved it. I loved pretending that I was on the phone. Just like mum.

But they didn’t. They don’t.

When I pick up the receiver and hold it to my ear, they look at me with confusion. Just like they do when I speak into the mouthpiece, or when I turn the dial.

They don’t understand that it’s a phone. If they want to pretend that something is a phone, they’ll pick up a card. Or a remote. Or an old phone (because we all have old phones in the toy box these days, right?).

This toy means nothing to them.

Earlier this year, Ashleigh and I watched Mary Poppins for her first time. She was enthralled. (As was I – I’d forgotten much of it, like the Sister Suffragettes and the cannons sending the Banks family’s furniture careening around the house.)

She gasped when Mary, Bert, Jane and Michael jumped into the chalk drawing. She laughed when the horses leapt from the carousel. Her eyes goggled when they all laughed-flew around Uncle Albert’s house, and she said “Wow!” when the chimney smoke formed a staircase for the stars to climb in the sky.

But nothing amazed her more than my answer to her question about the big black box on the wall of the Banks family’s home. “What’s that, mum? That big thing with the numbers that the man is talking into?”


What toy – or general item – from your childhood is now completely lost on your children?