Earlier this year, I reviewed The Dangerous Bride by Lee Kofman.

Not long afterwards, I was offered the chance to review another book featuring her words, and the words of many Australian women. How could I resist such an offer?

Here are my thoughts on Rebellious Daughters. 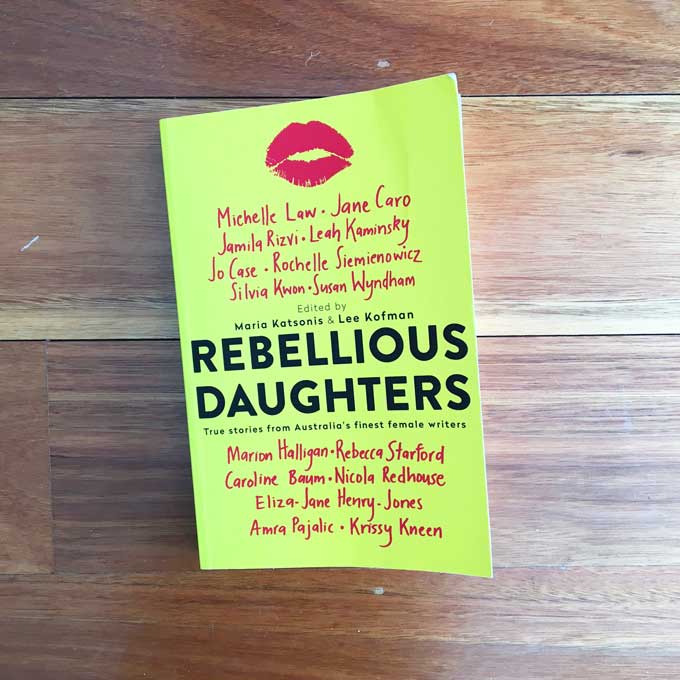 Good daughters hold their tongues, obey their elders and let their families determine their destiny. Rebellious daughters are just the opposite.

In Rebellious Daughters, some of Australia’s most talented female writers share intimate stories of defiance and independence as they find their place in the world.

I love a good collection of memoirs, and I love them even more when they’re themed. I had high hopes for Rebellious Daughters, but can’t quite articulate what those high hopes were.

I enjoyed the read well enough. I particularly enjoyed Jane Caro’s piece on parenting teens who rebelled in different ways, if only for the glimpse into my parenting future. I also enjoyed Lee Kofman’s tale of a rebellious moment backfiring hilariously, while Jo Case’s recollections of play-acting at teenagehood and fitting in struck a chord with me (even if her specific actions didn’t).

If I were to write a mini-memoir for such a collection, I could certainly use Jamila Rizvi’s title, ‘The Good Girl’. Meanwhile, Rochelle Siemienowicz’s piece earned the coveted ‘Most Dog-Eared Section’ trophy, as she delivered zinger after zinger while describing her efforts to not become her mother.

The bite-sized memoirs were each very well done. However, overall, I’m not sure they come together to create a single must-read piece of literature. There’s something almost unfinished about the collection; when I turned the final page, I felt that I wasn’t done. There was no satisfied sigh.

But even as I type those words, I wonder how important it is to be finished. Perhaps reflecting upon and sharing our histories in order to spark a broader conversation is more than enough.

I usually share a small selection of standout lines from books that I review here on the blog. This time, I have decided to share a standout line from each contribution in Rebellious Daughters. These lines aren’t necessarily the ‘best’ of each contribution, nor even the ones that best capture them. They are simply the lines that spoke most clearly to me.

Rebellious Daughters is a thought-provoking read that will have you laughing, feeling and reflecting on your own moments of rebellion (or otherwise). Recommended for anyone who has ever been, known or had a rebellious (or non-rebellious!) daughter.

You can purchase Rebellious Daughters from Booktopia here, or from Book Depository here. A percentage of sales of this book goes to Women’s Legal Service Victoria.

Have you read Rebellious Daughters? What did you think?

* This is not a sponsored post. I received a copy of Rebellious Daughters for the purposes of review. All views are my own. Some of the links in this post are affiliate links. If you click to purchase the item, I earn a little commission, but you don’t pay any extra.