Hello there! Welcome to the beginning of what might become a new series at emhawkerblog.

I call it the beginning, but really, this is the second post (hence the ‘part II’ in the title). The first post went live about half an hour ago over at Maxabella loves, where Bron asked me to write a post about grammar for her Teach Me series.

Grammar is a big topic. Big. Huge. So I started with punctuation. I covered (the absolute basics of) full stops, commas, apostrophes, slashes, colons and semi-colons at Maxabella loves.

And here, I’ll cover (the absolute basics of) brackets, dashes (both em- and en-, with a side note on hyphens), ellipses, question marks and exclamation marks. 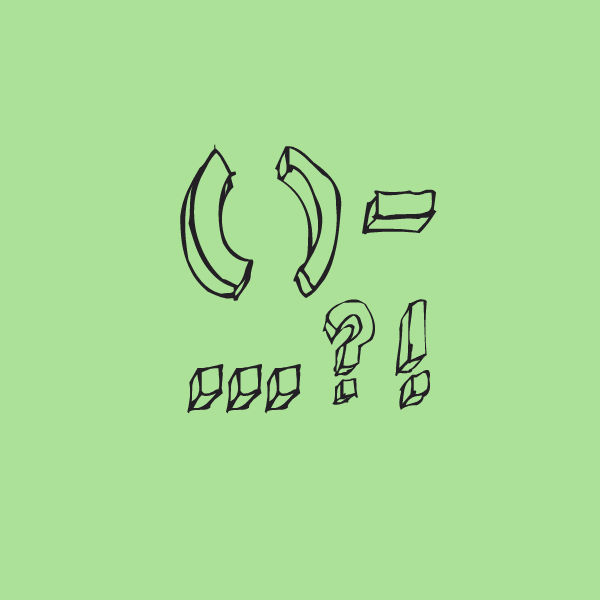 Now excuse me while I put my writer, editor and proofreader hat on. Just steadying the magnifying glass… there we go. Let’s hop to it. *high-fives self for putting in a bunny reference four days before Easter*

Ah, brackets. Parentheses. Most commonly used for asides (like this one), digressions (which rhymes with impressions), and to include text that is (arguably) optional.

The two most common errors I see made with brackets: forgetting to include the final bracket (seriously, it is amazing how often this happens [I’m tempted to leave this open to prove my point, but I just can’t do it]); and placing other punctuation on the wrong side of a bracket.

Dashes get a little more tricksy. So tricksy in fact that the font and word processing system I’m using for this blog won’t let me display them properly above, so you get a hyphen instead. (Note to Alanis: now THAT is ironic. Don’t you think?)

The en-dash is the shorter version. It should be used when specifying date ranges. The em-dash is longer. It has become the standard for separating text in a similar way to brackets and commas. So if you want to highlight something – or simply point out an alternative – em- is the way to go (and not just because it’s my name).

And all those dashes in my mentions of en-dash and em-dash? They’re actually hyphens. Hyphens join words and word fragments together to make new words. And hyphens are shorter than en-dashes, which are shorter than em-dashes. Are you still with me? Anyone? Anyone? Bueller?

Those three dots? That’s an ellipsis. And that’s what it should always look like. Three dots. Not two. Not four. Not ten. Three little dots in a neat little row.

The ellipsis shows that a sentence is not complete. Sometimes it signals missing words: perhaps a superfluous word or two omitted from a quote in an article with a strict word limit. Sometimes it shows a complete lack of speech, most commonly in transcripts where someone doesn’t speak or refuses to answer a question.

Sometimes it just leaves you hanging. Perhaps someone is trailing off as they speak. Perhaps they are leaving something open to interpretation. The ellipsis can leave you hanging without resolve. Or it can do this…

… and then this. Quite the cliffhanger.

What’s that? Oh, hello there question mark! This one is pretty straightforward. You use a question mark to show that something is a question. Enter Captain Obvious, stage left.

It can become complicated when combined with other forms of punctuation. Where do you put a question mark when using brackets within a sentence (like this one)? At the end. What about a question mark when using brackets around a whole sentence? (What do you think you should do?) What about quotation marks? Well, I might dedicate a whole post to quotation marks, if you’re interested. But we’ll get to your grammatical queries at the end of the post. If you stick with me that long. Let’s move on.

Aha! The exclamation mark! Once used sparingly, you’ll see this little guy everywhere these days. Especially if you’re a fan of the music of P!nk.

You use the exclamation mark when you want to convey excitement! Fear! Anger! Outrage! Insane levels of weeping and hysteria! OMG ZAYN LEFT ONE DIRECTION WAAAAHHHH!!!!!!!!! And sometimes you use it in conjunction with a question mark. Because doesn’t this look so exciting?!

And that’s it! Well, that’s not it. That’s all I can fit into a single post on these particular punctuation marks. Phew.

I’m going to take my writer, editor and proofreader hat off. (If you’ve joined me from Maxabella loves, you’ll know there has been a lot of hat-swapping so far.) And I’m going to put my much more comfortable linguist hat on for one final message.

Language is constantly changing. Constantly evolving. And that includes the use of punctuation and what is deemed ‘correct’ or ‘appropriate’.

I might read this post in twenty years’ time and laugh. In fact, if I read some of the text messages and emails I have stored and then read this post, I’d probably laugh right now. We’re seeing punctuation become more important in forms of communication where intonation and body language don’t play a part (and this post that I shared yesterday alludes to that).

Don’t fret if you don’t understand how to use punctuation correctly. Just keep it simple. And know that it will probably all change one day anyway. Reassuring, isn’t it?

Linguist hat off. Writer, editor and proofreader hat back on. Remember: if you’re no good at using punctuation, you can always hire someone to edit your work. Someone who knows enough about grammar to write blog posts about it, for example. *high-fives self for including a very subtle, barely noticeable plug*

Writer, editor and proofreader hat off. Parent hat on. My children are asking me to read a book. The dictionary counts as a book, right?

Are you interested in seeing more posts on grammar? What would you like me to cover?
And if you’re a fellow editor, hit me with your best shot. How many typos made it through the final edit? There’s always at least one…