“This’ll all seem funny one day.”

“Look on the bright side. In twenty years, you’ll laugh about this.”

Hard to believe when something horrible is happening in your life. But often true. Most horrible things become funny with hindsight. Or, if not funny, at the very least less painful.

What brought on this revelation? I recently laughed about something I once thought I would never, ever laugh about. Something that I recently thought of, thanks to McDonald’s.

Confession time: I am a sucker for McDonald’s. Especially when pregnant. So, last year, I scored a few of those Olympic Coke glasses they were giving away with their large meals. Four in fact.

And I must have succumbed to my McDonald’s cravings on consecutive days, because they’re all pink. 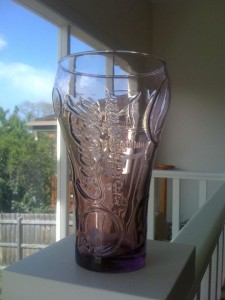 Yesterday, these pink glasses made me laugh. Eight years ago, they would have made me cry.

In a former life, I worked for a promotional product company. You needed stuff with your logo on it? I sourced the stuff, put the logo on it, and sold it to you. It was as glamourous as it sounds.

I was still relatively new to the job, working in a three-person team with the biggest budget of the department, when BOTH of my colleagues went on leave at the SAME time for an ENTIRE month. We had a few large quotes out at the time, and the workload was about to be bigger than I’d ever experienced. But I was of course keen to prove how excellently brilliant I was, and told my boss’s boss that I’d be fine holding the fort for the month. More than fine. I told him I’d kick big fat goals.

In the first week of that month, three of the biggest orders we’d ever had landed on my desk.

The largest of the orders (of the three, and also of any order that the company had ever received) was for something that had never been done before. A major pharmaceutical company wanted lots (tens of thousands) of glasses to be printed with measuring instructions for a new liquid drug.

But not just any old glasses. The range we showed them from our usual glass supplier was not good enough. They wanted the glasses to be a particular high-end brand.

“It must work,” said the client.

So the order was confirmed, and I got to it. I finalised the artwork, arranged the glasses, sent them to be printed, and celebrated the single biggest order we’d ever landed.

And then I got a call from the printer. The glasses had reacted oddly to the printing process.

THEY HAD TURNED PINK.

The original glasses were not pink. There was no pink in the logo. The test samples had not turned pink.

But these glasses were pink. All of them. All tens of thousands and mega-bucks worth of them.

I don’t usually swear on this blog. So suffice it to say that all I could think of was a word that starts with F and rhymes with yuck. And it wasn’t fire truck.

Lots of things happened after that. Meetings. More test prints. Cost analyses. Scientific glass sample tests. Blah blah blah. All leading to one conclusion: there was no logical reason for the glasses to have turned pink.

Very reassuring. Except that none of it stopped the inevitable outcomes. The client would not accept the glasses; the supplier would not take them back.

A word that starts with F and rhymes with yuck. And it’s not fire truck.

It was horrible. I cried. I stressed. I mulled. I went over and over the job in my head, trying to work out what I could have done differently. I tossed and turned. I hardly slept. And when I did, I dreamt of pink glasses, angry clients, confused suppliers and printers, and spreadsheets with big numbers and lots of negative symbols.

But I got over it. Eventually.

And now I can laugh. It’s still a raw laugh, but it’s a laugh. And in another ten years, it will be a belly laugh.

I might even use pink glasses at my next birthday party. It’s classy to use glasses from McDonald’s, right?


Do you now laugh about something that once made you cry?