It’s been more than a year between book reviews. How did that even happen?

I’ve been reading. I’ve been enjoying reading. I just haven’t gotten around to sharing that enjoyment with you all.

Well, this time I am. AND I have a copy to give away! WOOHOO! 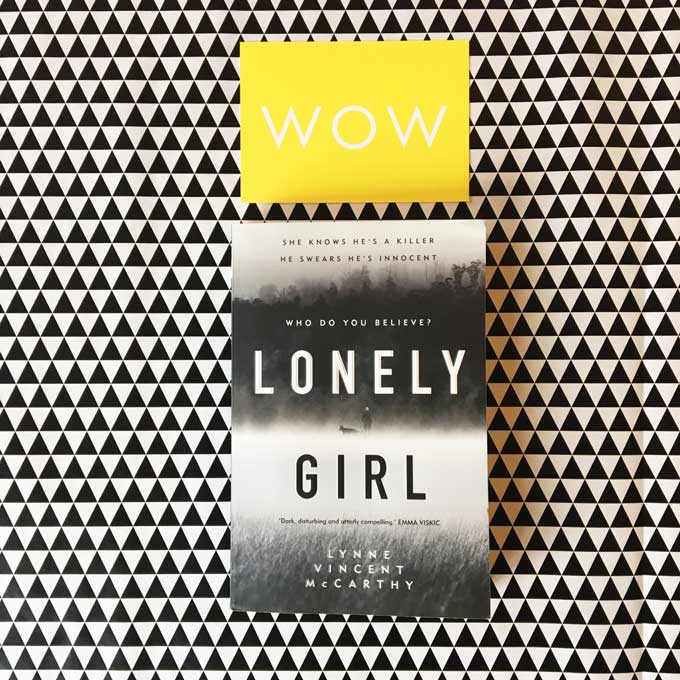 In the shadow of a mountain in small-town Tasmania, a woman named Ana is watching the clock, marking the days until she ends her life.

The strange, reclusive daughter of the local pariah, that’s how people will remember her, when they remember her at all. No one will mourn her, she reasons, not really. Not even her faithful dog River. The only thing she’s waiting for is the opportunity.

But then, on the very day she planned to end it all, the police find the body of local woman Rebecca Marsden. And for Ana, that changes everything. Because Ana was the last person to see Rebecca alive. Because Ana thinks she knows who killed her. And because Ana has decided to keep him for herself…

I almost said no to the opportunity to read and review this book. It sounded compelling, but it also sounded triggering, and while the blurb I received didn’t give away too much, it seemed the tale would most certainly include violence, ambush and entrapment.

But the premise was too rare to pass up. If I ask you to name all the books you can think of with a female-holds-male-captive narrative, can you think of any more than Stephen King’s Misery?

Ana lives with her dog, River, in the house that was her grandmother’s. River is dying, and Ana plans to follow him when he dies.

Lonely Girl sucked me in early. Which is no mean feat for a book in which I disliked almost every character I encountered.

How did it suck me in? I just had to know. I just had to know how someone could do what Ana did, and how they could justify it to themselves. A past me wouldn’t have thought the events of this book were possible. Unfortunately, I no longer think of people’s ability to talk themselves into despicable acts as fiction.

How could someone do such awful things? How could they justify to themselves the doing of those awful things, and not step back and think ‘NOW I’ve gone too far’ at each point of escalation?

I’ll never understand, but – one more time for the people up the back – I just had to know. I approached this book with trepidation and read it at arm’s length, and I was appalled, disgusted, disturbed and shocked. And I was unwittingly, unwillingly, totally and completely hooked.

And, I’m pleased to say, I remain okay with the world. A riveting read that didn’t give me nightmares. Winner.

I’m still thinking about the ending. If you read this book, I’d love to discuss it with you. But I’ll be ending the review there before the spoilers start to flow.

Lonely Girl is Lynne Vincent McCarthy’s first novel. Is it too early to say I can’t wait for the next one?

You can purchase Lonely Girl from Booktopia here and find out more about the book from the publisher, Macmillan. Or you can enter to win your very own copy below!

Thanks to the team at Macmillan, I have a copy of Lonely Girl to give away!

For your chance to win, leave a comment below answering the following question in 25 words or less: What do you love best about a good thriller?

This competition has now closed. Congratulations to our winner, Cassandra!

(If you’d like some general tips on winning games of skill, head to my post on how to win 25-words-or-less competitions. And if you think that should read 25 words or fewer, check out this one as well.)

{Here comes a whole lot of fine print stuff. Yawn. This competition is open to Australian entrants only, and delivery must be to an Australian address. This competition is based on skill. My judgement is final, and no correspondence will be entered into. Unless you have read Lonely Girl and would like to discuss it in detail. In which case, let’s correspond! The prize is one (1) copy of Lonely Girl, RRP $29.99. Competition opens 6.00pm 2 July 2018 and closes 11.59pm 8 July 2018, AEST. Yawn. The winner will be contacted and must respond within three days to claim their prize. The winner will be announced in an update to this post and on Twitter, Facebook and Instagram when the winner has confirmed. The prize is provided by Macmillan and will be sent by Macmillan directly. Yawn. The end. Zzzzz.}

* This is not a sponsored post. I received a copy of Lonely Girl from Macmillan for the purposes of review, and they will provide the giveaway copy. All views are my own. Some of the links in this post are affiliate links. If you click to purchase the item, I may earn a little commission, but you won’t pay any extra.