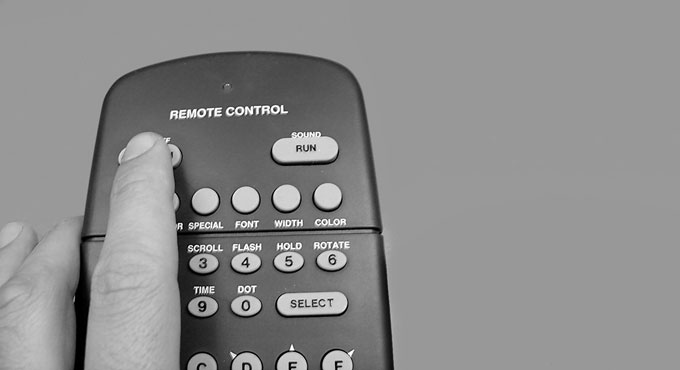 When I was nine years old, my family bought a VCR. We were so excited, so fascinated. It had a remote control! And the remote control had lots of buttons! So very many buttons!

Our favourite button was labelled STROBE. If you pressed it, it produced a strobe effect on screen by freezing the image every second while the audio continued unaffected.

Our dad made it our favourite. If we pressed the button, he would pretend to be ‘in strobe’ as well. He would walk with jerky movements, move his head from side to side like a carnival clown or start doing the robot as my brother and I rolled on the floor in fits of laughter.

Eventually, we didn’t need the remote. If my brother or I said STROBE then, no matter where we were or what our dad was doing, he’d start strobing his movements. We especially liked to say it if he was walking or running, and caught him on one foot.

STROBE. Change one letter and you get STROKE. And, almost four years after we got the VCR – 21 years ago now – that’s what took our dad away from us.

And STROBE lives on. Not just as a memory itself, but as the form that my other memories of my father take. They’re flashes, pulses of memory that bob to the surface occasionally, and are generally accompanied not by a constant moving image, but by a single image or feeling.

STROBE. Dad showing us how to boogie board, his face lighting up as the waves propelled him to the shore. STROBE. A smile breaking out across his face as his fingers worked their way across the fretboard during a mid-song guitar solo. STROBE. The feel of his lips on my forehead as he kissed me goodnight and told me he loved me. STROBE. Dad leaning back in his chair, eyes closed, soaking up the sounds of the latest Queen CD.

STROBE. My dad’s inert body and him-but-not-him face presented for viewing at the funeral home.

STROBE. My parents’ hands entwined, my father’s other hand on the steering wheel, as he drove us to my grandparents’ house. STROBE. The smell of Deep Heat as my mum massaged dad’s aching back. STROBE. His hand putting the final touches on a blackboard rendering of Bart Simpson. STROBE. An exclamation of proud surprise when I sang the high notes in an impromptu family car singalong of Somebody to Love.

STROBE. The sound of creaking as my father’s coffin was lowered into his grave. STROBE. The smell of perfume as I buried my head into my mother’s neck.

STROBE. Tears on my wedding day as my mother presented me with a ring formed from her engagement ring. STROBE. The smile on my son’s face, so very like my dad’s.

My dad. A life lived and loved in full streaming colour.

A life I now remember in STROBE.

Next week is National Stroke Week. I’ve written more directly about stroke in the past – my health story, my father’s death and the meaning of stroke.

This year, I’m writing more generally about the effect my father’s stroke has had on me and my memories, more than 21 years after he died.

This year during National Stroke Week, the Stroke Foundation is focusing on time. From their website:

A speedy reaction not only influences the treatment path for a person having a stroke but also their recovery. Most treatments for stroke are time sensitive so it is important we Think F.A.S.T. and Act FAST!

Did you know during a stroke 1.9 million brain cells are lost per minute?

This is why it is important to identify the signs and symptoms of stroke F.A.S.T and call ‘000’ immediately.

Please familiarise yourself with the symptoms of stroke, and take some time next week to check out the fantastic work of the Stroke Foundation.

Have you been affected by stroke, or lost a loved one? What form do your memories take?

« Why I blog
Seven things I learnt from the ProBlogger conference »

Leave a Reply to Kirsty @ My Home Truths Cancel reply