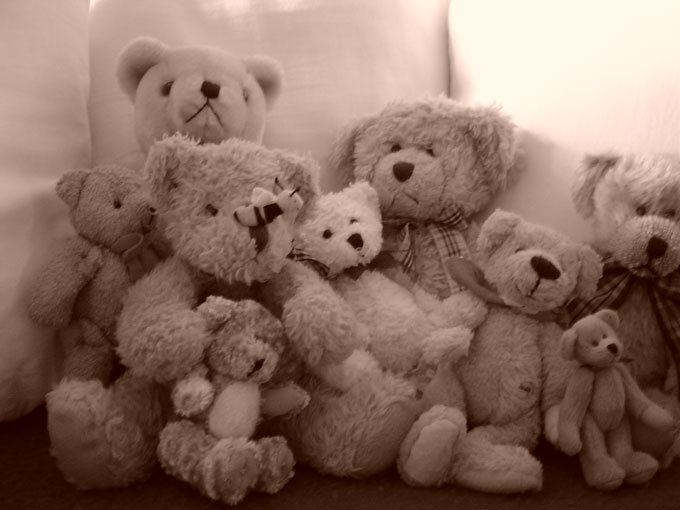 It’s been a long time between music group programs. But they’re finally back!

(Confused? Not sure what I mean by music group program? Start here. Then come back… Welcome back!)

This time around, I’m sharing a music group program about bears. When I first mentioned that I planned to present a bear program, some of the parents in our group were surprised. Surely there can’t be that many songs with bears?

There are. In fact, I couldn’t fit them all in!

I like this bear program for lots of reasons. First, it’s unexpected. Songs about animals in general, the body, and letters and numbers are all to be expected at a toddler music group. But an entire program dedicated to bears? That’s different!

Second, there’s a good mix of songs with movement and dancing, and calm, sitting down songs and recitations.

And third, you can get away with just a single prop per child: a teddy bear! We asked people to bring their favourite teddies along, but you could also provide a basket of toys from which each child can select a teddy. We certainly have more than enough teddies to do that!

Let’s get into it!

We’re Going on a Bear Hunt

We’re going on a bear hunt, we’re going to catch a big one…

The program starts with a march around the music group area (at my house, that’s the open living and dining areas). This is a call and response song, so decide beforehand (and announce) how you’re going to do it. Are you going to sing the call line and have everyone respond? Or do you want to divide the group in half as if you’re performing a round?

Then swish your arms as you walk through the grass, trip as you stumble through the forest, stomp as you squelch through the mud and tiptoe as you approach the cave.

We created a ‘cave’ in our lounge room by placing a brown bed sheet over a kid’s pop-up tent. I placed a teddy bear inside the ‘cave’, and once he was found, he became my prop for the rest of the program. You can create a ‘cave’ any way you like – throw a blanket over a chair or coffee table, hide a bear behind a couch or decoration, or simply put your bear under a blanket or cushion.

I Know a Hairy Bear

This song is a great follow-up to We’re going on a bear hunt because the bear is still (pretend) scary. We’ve just run from the bear in the cave, and now we get to growl and become the bear.

Fuzzy Wuzzy was a Bear

This can be performed as a poem, but I also managed to track down a song version. The version I found is, shall we say, a little awkward, with a third verse about a mouse who has no spouse because she’s not pretty(!). So rather than sharing that questionable version, I suggest you just recite the Fuzzy Wuzzy verse:

It’s a short one, so you can do it a few times and see if the kids can remember it to recite back to you.

If you go down to the woods today, you’re sure of a big surprise…

Oh, how I love this song! To be honest, I thought The Teddy Bear’s Picnic might be a little difficult for some of the kids. But they love it too. I’m yet to see a child nail every word of the song, but I don’t think that’s necessary. They know that the song is about teddy bears having a picnic, and that the teddies still have to go home to bed at the end of it! LIFE LESSONS. 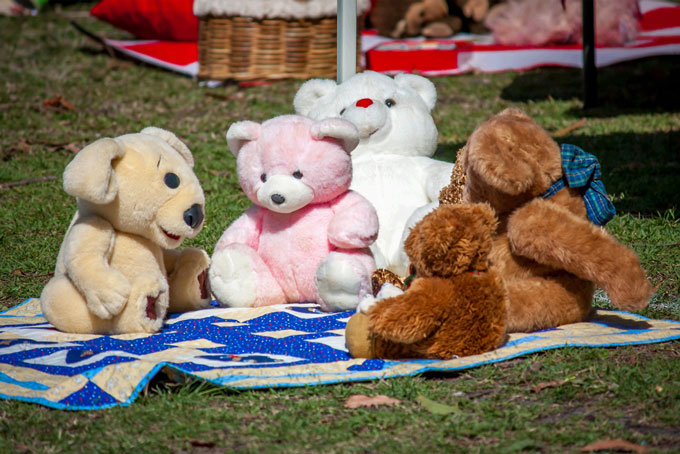 Prop suggestions for this song: a picnic rug and toy kitchenware and food. Set up the rug before you sing the song, and then let the kids set up the actual picnic as the adults sing. The kids may enjoy making their teddy bears picnic so much that you have to repeat the song so they can keep going!

Bananas in pyjamas are coming down the stairs…

This is a golden oldie. When I first circulated the song sheets for this program, I had one parent show surprise that I would use a television show theme song in a music group program. They showed greater surprise when they heard the original song!

This song is lots of fun, and easy to make up your own actions to. You can get up and walk ‘down the stairs’, then form pairs, and then chase your teddy bears. We compromise: we stand and walk our right ‘banana’ fingers down our left hand staircase, then jump them down two at a time, then chase our teddy bears around until we catch them unawares.

Round and Round the Garden

Round and round the garden like a teddy bear…

We all know this one! Send your finger round and round your palm garden, just like a teddy bear. And do it twice, so each hand gets a go!

Round and round the garden
Like a teddy bear
One step, two step…
And a tickle under there!

If My Teddy Bear Could Talk

I still heart Justine Clarke. I always will. This is a nice, slow, cuddle-wuddle song about playing with and listening to your teddy bear. It includes lots of actions that you might do with your teddy, such as making it fly, going for a walk and a run, and backflipping. It also includes this line, which turned out to be everyone’s favourite: My teddy likes to cuddle me, huggle me and snuggle me… Aaaah. Nothing better than a teddy cuddle.

Now that we’ve had a cuddle, it’s time to get back up and do some actions with our bears! Turn around, touch the ground, reach up high, touch the sky, bend down low, touch your toes, turn out the light, say good night!

Everybody clap, everybody sing! Bow to your partner, then you turn around…

This is the perfect song to wind up a music group program. Not just about bears, but any program. It’s easy to learn, easy to sing, has easy-to-learn actions, and ends with everyone pretending to sleep. Perfection.

Music: Hot Potatoes – The Best of The Wiggles (The Wiggles CD – includes songs from previous programs) – buy from ABC Shop

And that’s the program!

There are plenty of songs out there about teddies and bears. So feel free to rework this program (or restart altogether!) if it’s not your cup of tea.

Other songs I considered while putting this program together:

General songs you can rework to a bear theme:

Enjoy! If you do try out this music group program, whether with a group of children or just with your own little ones, please let me know. I’d love to hear all about it!

Do you host a toddler music group? What songs would you include in a program about bears?

« (Apparently) controversial things about me
And just who decided I’m a grown-up? »