Sound familiar? Confession time: the paragraph above is a cut and paste from a post I wrote last October, when I reviewed Olsson’s Boy, Lost. It was beautiful book, but it required a lot from me. So I took a break before reading My Mother, My Father.

The break is over. The book has been read. The emotions are swirling. Here are my thoughts.

My Mother, My Father: On Losing a Parent / edited by Susan Wyndham 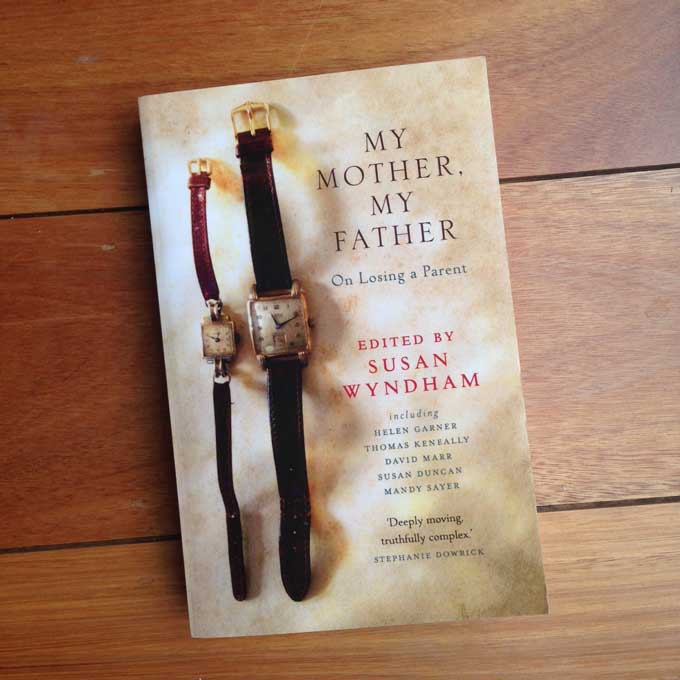 This book is a tribute to our mothers and fathers, the people who have known us longest; characters from another era who are as familiar as our own faces and sometimes as unknown as strangers. The stories are about lifelong relationships. A part of us goes with them. The pages throb with love as well as murkier emotions – sorrow, guilt, fear, anger, relief, regret – and a fair leavening of humour and joy.

I was ready for this book to knock me around a bit. A lot, in fact. And it certainly made me feel.

But I don’t feel knocked around. I cried, sure. I felt, most certainly. But I also laughed, tsked and gasped. I nodded. I smiled. At one point, I even guffawed.

So instead of feeling knocked around, I feel content. And more importantly, I feel honoured to share these glimpses into the parent-child relationship with the 14 contributing authors.

With My Mother, My Father, Wyndham has created more than just these glimpses. She’s created a book that gives all of us permission to reflect on those relationships with honesty and humour. She’s given us permission to shed the rose-coloured glasses, to see our parents for the flawed people they are, and to acknowledge that we and our recollections are also flawed.

We can be our parents’ greatest critics. But we are usually also their staunchest defenders.

I write this review from the perspective of someone who lost their father very early in life. I was 12 years old when my dad passed away suddenly, and giving myself permission to see him as anything but a hero and a legend is still difficult. After all, at that stage of my life, when he wasn’t those things, he was just MEAN. He was just such a PARENT, y’know? I got sent to my ROOM and it wasn’t FAIR and life’s not FAIR and he just didn’t UNDERSTAND what it was LIKE, did he? Everyone else gets EVERYTHING they want ALL the time and IT’S JUST NOT FAIR, DAD! *door slam*

The contributors to this book are Margaret Barbalet, Nikki Barrowclough, Caroline Baum, Susan Duncan, Helen Garner, Kathryn Heyman, Thomas Keneally, David Marr, Linda Neil, Margaret Rice, Jaya Savige, Mandy Sayer, Gerard Windsor, and Wyndham herself. They have all lost one or both of their parents, and all reflect on those losses in very different ways.

I usually include standout lines in my book reviews, and try to keep them to a maximum of five. This time, I have instead chosen a standout line from each contribution. These lines aren’t necessarily the ‘best’ of each contribution, nor even the ones that best capture them. They are simply the lines that spoke most clearly to me.

(In other words, everyone should read this book.)

You can purchase My Mother, My Father from Booktopia here.

Have you read My Mother, My Father? What did you think?