My apologies. It’s been a while between book reviews. Life and writing work has gotten in the way of both reading and personal writing recently.

But a recent Book Depository sale had me champing at the bit to make up for lost time. So, if you like book reviews, stay tuned. There are plenty heading this way over the coming months.

Last week, I read Still Alice. And here are my thoughts. 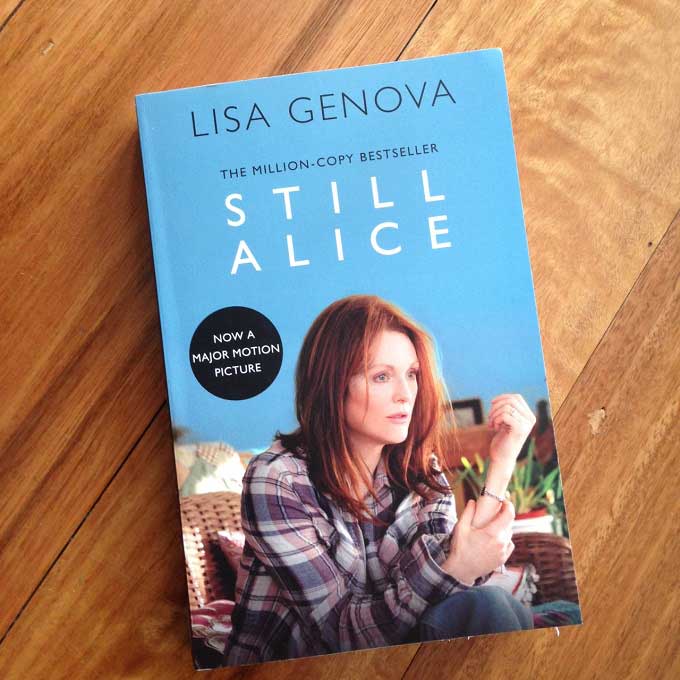 Alice is just fifty when she finds herself in a downward spiral, increasingly disoriented and forgetful. A university professor, wife and mother of three, she has books to write, places to see, grandchildren to meet. But now a tragic diagnosis of early-onset Alzheimer’s disease is set to change her life – and her relationship with her family and the world – forever.

Losing her yesterdays, living for each day, her short-term memory is hanging by a frayed thread. But she is still Alice.

My thoughts in a nutshell: I adore this book.

Still Alice is told from Alice’s point of view. It’s not narrated by Alice; it’s written in the third person, but follows Alice and shares her thoughts and feelings as her Alzheimer’s disease progresses.

But it’s the fact that we bring our own knowledge, awareness and memories of the earlier stages of the book to Alice’s thoughts and feelings that makes the book so powerful. The contrast is stark.

I identified with Alice because I’m a linguist. All the technical details of her work spoke to me loud and clear. I felt her terror as words moved in and out of her grasp, and a large part of her identity became inaccessible. I felt her pain as she searched for the word ‘lexicon’ in her own lexicon.

I identified with Alice because I have an autosomal dominant disease. Like her, I feel guilt that I may have passed it on to my children.

She made me feel.

Alice becomes helpless, and is painfully aware of it happening. Until she isn’t. It’s both heartbreaking and beautiful to follow.

I usually include standout lines in my book reviews, but this time I’d like to include a standout passage. There were plenty more standout lines and passages, but this particular one shines a spotlight on the stigma attached to mental health.

She wished she had cancer instead. She’d trade Alzheimer’s for cancer in a heartbeat. She felt ashamed for wishing this, and it was certainly a pointless bargaining, but she permitted the fantasy anyway. With cancer, she’d have something that she could fight. There was surgery, radiation, and chemotherapy. There was the chance that she could win. Her family and the community at Harvard would rally behind her battle and consider it noble. And even if defeated in the end, she’d be able to look at them knowingly in the eye and say good-bye before she left.

Still Alice took me on a journey. (I cringe at the word ‘journey’, but sometimes you just have to use the clichés.) I have to admit that sometimes, the book isn’t as good it could be technically. It feels one or two edits away from being as near to perfect as a book can get.

But that perfection wouldn’t strengthen my recommendation. Highly recommended for anyone and everyone. You can purchase Still Alice from Booktopia here, or from Book Depository here.

Have you read Still Alice? What did you think?

* The links in this post are affiliate links. If you click to buy the item, I earn a little commission but you don’t pay any extra.