There are 152 flowers in front of our neighbour’s house.

At least, there were a week ago.

Ashleigh and I counted them. Every single one.

We also counted the petals. Not on each and every flower – my patience was present in record-breaking amounts that day, but even then it didn’t stretch that far. But we counted the petals of many of the flowers. 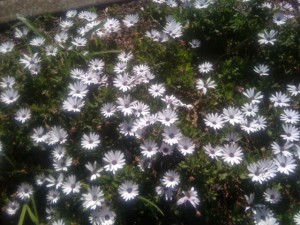 Ashleigh had stopped  by the nature strip, enchanted by the flowers. She started counting them. Mitchell was sleeping in the pram, and although we had been walking to the park, we didn’t actually have anywhere to be, any appointments to keep, or anything that had to be done.

Then she wondered how many petals were on all of the flowers. We chose a few to count, and noticed that they had the same amount of petals. Eighteen on each flower.

She asked if they all had the same. I said I didn’t know. She started counting them all.

I pulled my phone out. I opened Google.

I stopped. I closed Google. I put my phone away.

And I counted the petals with my daughter. Eighteen on each flower.

I don’t know if these flowers always have eighteen petals, or if we just flukily found only ones that did that day.

I don’t even know if they’re flowers, or if we sat next to the nature strip of our neighbour and counted the flowers and petals of what is considered to be a weed.

I don’t need to know. Ashleigh and I had a fabulous time. Mitchell woke soon thereafter, and Ashleigh told him all about the flowers, how many there were (“152, Mitchell! That’s older than mummy and daddy put together!”) and how many petals they seemed to have.

And the phone stayed away. Until, of course, Ashleigh helped me snap this pic so we could show daddy the flowers.

Sometimes technology brings you together.

Sometimes you have to disconnect to connect.


When was the last time you switched off Google and just counted? Or reasoned? Or guessed?

« Neighbours: the good, the bad and the thoughtless
Conversations with secrets »