In August, I went to the Bendigo Writers Festival and had a wonderful time. I thought I would enjoy it and get a bit from it, but my expectations were exceeded. Twice over.

Immediately following the session, I purchased both books. Now, some weeks after having finished Boy, Lost, I feel ready to review it. Just. Here are my thoughts. 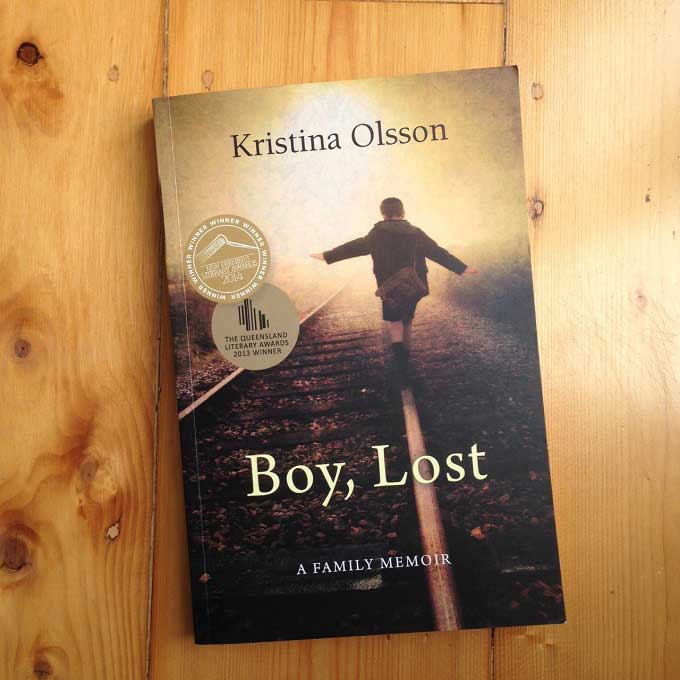 Kristina Olsson’s mother lost her infant son, Peter, when he was snatched from her arms as she boarded a train in the hot summer of 1950. Yvonne was young and frightened, trying to escape a brutal marriage, but despite the violence and cruelty she’d endured, she was not prepared for this final blow, this breathtaking punishment. Yvonne would not see her son again for nearly forty years.

Boy, Lost will rock you. And not the way Queen did.

The subject matter is tough, and some parts of this book could be confronting. But Olsson’s writing and words smooth the way. Her use of language is impressive in its own right, but when it’s tied to such emotional and personal subject matter, it’s even more so.

Olsson weaves between the past and the present, adding shape to past events with her own reflections within the context of her family’s sustained, unspoken grief. This could have been jarring – particularly as the past often moves between Yvonne and Peter as they live their lives separated from each other – but it is not. The book flows naturally.

Boy, Lost is unapologetic in telling events as they happened, but Olsson doesn’t label Peter’s father a monster. (You’ll form your own opinion on that.) She provides some background so that you can begin to understand (but never excuse) the factors contributing to his beliefs and behaviour.

But this memoir isn’t about him. It’s about Yvonne and Peter above all else, and the book’s final pages are a reminder that real life is not a finite story, let alone a fairy tale.

Boy, Lost is a raw, honest and beautiful book. It took more out of me than I was expecting, and to date I’ve led what some would call a sheltered life. So if you find the topics of domestic violence, child abduction and all-consuming grief confronting, then you may wish to proceed with caution.

But the topics are treated with care and respect. You may wish to proceed with caution, but I highly recommend that you do proceed.

Recommended for anyone who thinks, as I do, that grief needs a louder voice in modern life. Thank you for writing this book, Kristina Olsson, and for your words at the Bendigo Writers Festival. There were of course tears in the room, but also a general feeling of mutual support and care that was incredibly uplifting.

You can purchase Boy, Lost from Booktopia here or from Book Depository here.

Have you read Boy, Lost? What did you think?

« Click, Clack, Moo and more: A Barnyard Collection – Doreen Cronin and Betsy Lewin (book review)
Do you phub? – an interview with David Astle »