What an interesting couple of days for Australian lovers of all things wordy!

Misogyny ruled my life yesterday. No, I didn’t experience hatred because of my gender, or entrenched prejudice. But the Macquarie Dictionary‘s decision to update the definition of the word, together with the debate it sparked, took over my world. 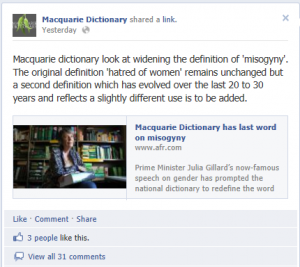 The Australian Financial Review article expanded upon the reasons for it, and included the following points:

Oh, how right they were with that last point!

More publications posted stories about the change, and they all quickly sparked debate, gathering comments and shares. But few likes.

Later on in the day, after sifting through yet more articles and opinions on the change, I cruised on over to my favourite blog, that of David Astle. He had also posted about the change, purely in the name of research, asking people’s views on the meaning of misogyny. Does it mean simply hatred of women as defined in the dictionary, or ‘has the word always carried the sexism element for you? Are hatred and prejudice such close cousins they are almost interchangeable?‘

My view? I am glad that the Macquarie Dictionary has made this change. For me, the notion of prejudice against women has always formed a part of the definition of ‘misogyny’ (and having been born in the 80s, this fits with Ms Butler’s note). I know it wasn’t there in black and white in the dictionary – yet – but the use and understanding of the term seemed to include that understanding.

But if you read the comments on any of the announcements or articles, I would appear to be in the minority.

I don’t believe that. I believe that I am in the majority. But I am certainly in the vocal minority.

Some people are outraged. Flabbergasted. They can’t believe that the Macquarie Dictionary is making this change. And the reasons behind these reactions fall into a few different categories.

First, the political debate. The timing of the announcement – almost immediately following Prime Minister Gillard’s now infamous speech in Parliament last week – means that people haven’t been able to separate the decision from Ms Gillard herself. Those against the decision argue that we shouldn’t change the meaning just because Ms Gillard didn’t use the word ‘correctly’.

I don’t work for Macquarie Dictionary. I don’t know Susan Butler. But I believe wholeheartedly that the definition is not changing to make Ms Gillard retrospectively ‘correct’ in her use of the word last week. The definition is changing to reflect the understanding and use of the word in Australian English, something that merely hit the international spotlight last week.

Ms Gillard was using the word ‘correctly’ in the sense that Australians have been using it that way for decades. It’s simply time for the dictionary to reflect this. Ms Butler said as much herself: ‘The use of the word has been changing and what has happened in the past week is made highly visible.’ (Source here.)

Next, the prescriptive vs descriptive debate. Should a dictionary tell you (prescribe) how to use words correctly, or reflect (describe) how the words are actually used in society?

I know I’ve blogged about my grammatical grrrrs before. Things like apostrophe abuse (more than once). Verbing nouns (despite clearly being guilty of it myself). I’ve also owned up to being far from perfect in the world of language. I can certainly be prescriptive.

But, as a linguist, I’m on the descriptive side of this debate. If people use the words misogyny, misogynist and misogynistic to include elements of sexism that are not encapsulated in the simple definition hatred of women, and this has been shown to be true and accepted in printed examples over time, then the definition has changed, regardless of whether it appears in black and white in the national dictionary.

Finally, the etymological debate. Those familiar with the etymology of the word misogyny state that the word simply cannot mean anything other than hatred of women because it stems from Greek misogynia, the elements of which are miso- (the base of the words for hate, hater and hatred) and gune or gyne (woman).

When you put these elements together, how can the resultant word mean anything other than hatred of women?

All I can say about this is that if all words were defined by the original meanings of their root words, our dictionary would look very different to what it does today. Words change. Meanings shift. Some meanings, such as this one, become broader, taking on new meanings. (The most popular example of semantic broadening from my university days was the word dog, which once referred to a specific dog breed. For a more modern example, find a dictionary and look up the word bandaid.) Others narrow (meat used to mean simply food). Some shift meaning completely through metaphor, or through other relationships with the previous meaning and the new meaning.

The definition of the word misogyny is being amended to reflect the use of the word. When was the last time you heard the word misandry used? If you did a vox pop in the street, how many people would be able to define it?

When misandry is used in the same (or perhaps semantically opposite?!) generalised way as misogyny, in a widespread fashion, let’s amend that definition too. But only then.
(NB: update 19.10: there is evidence that misandry has been used this way in specific texts. See the note from Macquarie Dictionary A Response from the Editor on ‘misogyny’ (also available at the bottom of this post).)

Wow. Talk about getting on my soapbox! When I started writing this post yesterday, I didn’t expect it to rival War and Peace in length.

But it’s a linguistic soapbox. It’s not political. Do I think Prime Minister Gillard was correct to use misogyny in her speech last week? I think the word ‘correct’ has no place in that sentence.

Ms Gillard used the word in a widely understood interpretation that incorporated sexism and prejudice against women. Her use highlighted this interpretation, and prompted an update from our national dictionary. (A dictionary that updates words constantly.)

So why am I sitting on the fence in my blog post title? I’m not. I believe in both titles. The meaning of misogyny is changing; quite literally, it’s being amended in our national dictionary. But the meaning of misogyny also isn’t changing, because it has been used this way for quite some time.

The Macquarie Dictionary is simply catching up.


What does the word misogyny mean to you? Have you been involved in the debate? Do you care?


UPDATE: I will include links to other articles here as I become aware of them.

Leave a Reply to The Kids Are All Right Cancel reply