Yesterday was The. Day. From. Hell. I think that, somehow, Ashleigh knew what was planned yesterday morning and was determined to make me suffer for it.

From the moment Ashleigh woke, she didn’t want a bar of me. She wouldn’t let go of Cameron, and screamed when he left for work. She wasn’t interested in milk, food, cuddles or books. She screamed when I tried to change her nappy. It took ten minutes to strap a writhing, sobbing Ashleigh into her car seat. We waited at the doctor’s surgery for thirty minutes before seeing the doctor. We then waited for fifty minutes before seeing the nurse. Ashleigh howled with the first injection, then simply looked at me with seething hatred during the second. We waited for fifteen minutes to ensure Ashleigh didn’t get chicken pox or bird flu, or turn into a giant blueberry, during which time she stole a McDonald’s bag from another child in the waiting room and devoured half of the chips. We then had another ten-minute wrestle at the car seat.

Then choirs of angels started singing. Ashleigh fell asleep in the car on the way home, transferred to her cot with no problems, and slept for three hours. When she woke, we played cot Peekaboo for a delightful fifteen minutes of giggles and smiles.

Then the angel choir flew away. More screaming. More tantrums. I could go into detail again, but suffice it to say that by late afternoon, I was well and truly over it. In a flash of brilliance, I decided to take Ashleigh to the library. I had never known Ashleigh to maintain a bad mood at the library.

There’s a first time for everything.

When I’d had enough of the screaming and throwing, not to mention the looks and groans from other library patrons, I told Ashleigh to pick one last book to borrow so we could leave. What did she bring me? 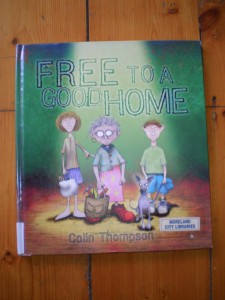 Cue near-hysterical, body-shaking laughter from me, more looks from our fellow library patrons, and Ashleigh wondering if her mother had lost the plot completely. Which I probably had.

What has made you laugh when you felt ready to cry?