On November 17, a chocolate-for-breakfast moment acted as a wake-up call. It was time to break up with chocolate. And, somewhat surprisingly, I’m not finding it that difficult.

This isn’t something new I’ve learnt – it’s something I’ve relearnt eight years after forgetting it.

In 2003, I decided to have a diet and lifestyle overhaul. Not that my diet and lifestyle were that bad – in fact, I’ve never been a big drinker, and have always preferred a night in to a night out – but everyone has things upon which they can improve. So I gave up drinking altogether (with the notable exception of my 21st birthday party), and I gave up chocolate.

I found that it wasn’t that difficult. I was busier then… no, not true. Let me rephrase. I was involved in a wider variety of things then. I had work, netball, netball training, the Chocolate Lovers’ Society (I wish I was joking – I was the secretary!) and even university and study occasionally. Not to mention housewarmings, the tail end of the 21st season, and of course spending time with my boyfriend (now husband). I didn’t lapse once.

Eight months in I decided that, having gone without chocolate entirely for that long, I could moderate my chocolate intake if I indulged again. And it worked for a while. But the amount I ate per sitting continued to increase, until I was back to my block-a-day habit.

This time, I’m three weeks into the ban, and haven’t lapsed once. Sure, I ate four cinammon donuts in the space of five minutes one day, but there were no traces of chocolate on them whatsoever!

The most impressive part? I’ve done it with this sitting in my fridge the whole time (a Kris Kringle present): 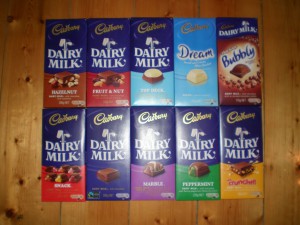 So, I’m Superwoman. Or perhaps it’s just not that difficult. After all, there are only two times of day that I think about chocolate: when I’m awake, and when I’m asleep.